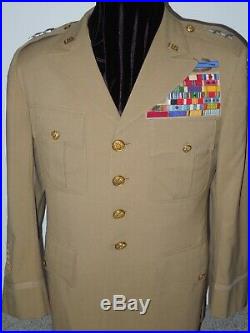 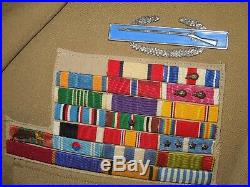 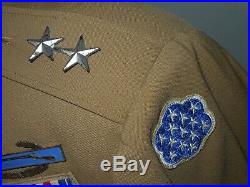 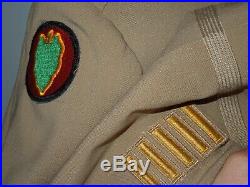 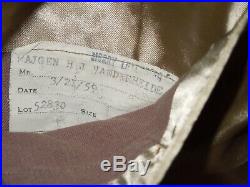 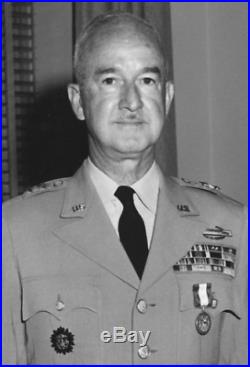 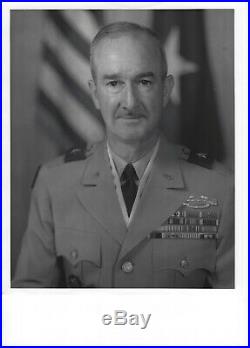 1959 dated Khaki uniform of Major General Herbert J. It has a sewn on custom ribbon bar, sterling CIB, and period one piece MG Rank. His name is typed on the tailor tag in the label. The right sleeve has his 24th ID patch.

Comes with some printed biographical research. All insignia is original to the uniform and the General. The two photos of him in uniform are digital;no hard copy included. Major General Herbert Vander Heide was born on November 26, 1903.

In March 1922 he enlisted in the Army. He graduated from the U. Military Academy June 13, 1929 and was commissioned a Second Lieutenant of Infantry. His first assignment was to the 30th Infantry Regiment at the Presidio of San Francisco, California. On completion of his school course in June 1933, he was assigned to the 33rd Infantry Regiment, Fort Clayton, Panama, Canal Zone.

He served the 30th Infantry Regiment at Fort Benning (1935); Aide-de-Camp to Brigadier General Singleton, Commandant of the Infantry School (1936); 69th Medium Tank Regiment, 1st Armored Division, Fort Knox, Kentucky (1940). He then was a student in the Command and General Staff College. He then served the G1 Section, War department General Staff, Washington, D.

His next duty was as Regimental Commander of the 21st Infantry Regiment, 24th Infantry Division in Korea (1951); 1st Cavalry Division as Assistant Division Commander (1954); was named Chief of Staff, G2, USAFFE and Eighth U. He assumed command of the Joint Military Aid Group, Greece (1959). His military decorations included the Silver Star with an oak leaf cluster, the Bronze Star with an oak leaf cluster, the Purple Heart, the Distinguished Service Medal and the Legion of Merit. Vander Heide, 85, died March 2, 1989 of cardiac arrest at the Virginian Retirement Home in Fairfax, VA.

At that time, an unpaid item case will automatically be opened. It will be left, but please be patient. Do not message me seeking feedback. The item "WWII Korean War US Army MAJOR GENERAL Vander Heide Uniform Jacket CIB RIBBONS" is in sale since Monday, March 23, 2020. This item is in the category "Collectibles\Militaria\Vietnam (1961-75)\Original Period Items\Uniforms".

collector" and is located in Jamesville, New York. This item can be shipped worldwide.