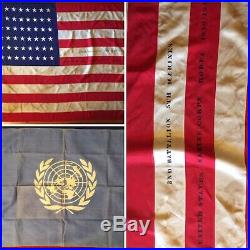 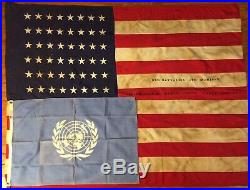 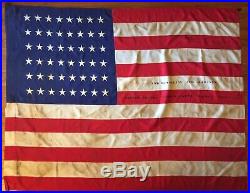 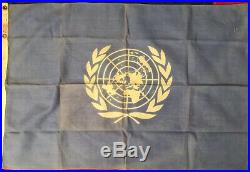 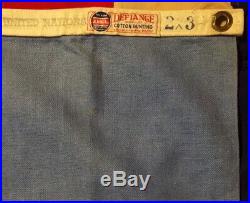 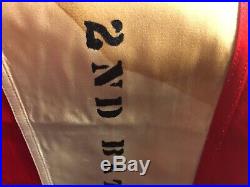 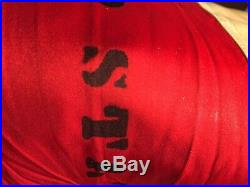 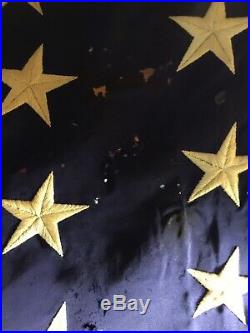 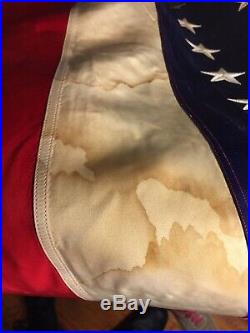 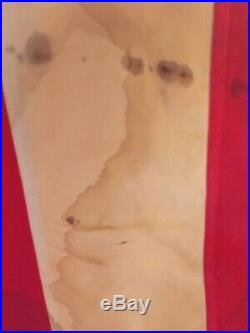 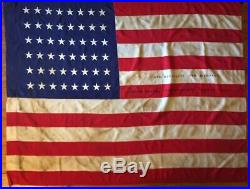 This is a quick sale. I have to sell my personal collection to help my parents with their medical bills. This flag approximately measures 4ft-4in by 5ft-6in. This flag is made of a Heavy Silk Banner Bunting or appropriate substitute. This flag has a pole sleeve with the stripes going all the way to the sleeve.

The sleeve is lined with a flannel lining with a leather tab in the upper and lower sleeve. The UN Flag measures 2ft by 3ft and was manufactured by ANNIN & CO NY under the trade name of Defiance. The flag is faded from use & storage. This flag was used during the Korean War and brought home with the (retired) 2nd Battalion, 5th Marines Regimental Battle Flag. Unfortunately, this Retired USMC Battle Flag does have water damage from being used outdoors.

The flag has staining and other damage from being folded and left in a box in an attic for 64+ years. I have pictured the small pin holes from mildew within the canton of the flag. You can see where the mildew started on the hoist end near the sleeve but was caught in time. This flag came from a family estate where the Marine fought in the Korean War. This Regimental Battle flag doesn't have fringing because the Navy and Marine Corps do not use fringing on their Battle Flags. 2nd Battalion 5th Marines (2/5) is an infantry battalion in the United States Marine Corps consisting of approximately 800 Marines and Sailors. They are based out of Marine Corps Base Camp Pendleton, California and fall under the command of the 5th Marine Regiment and the 1st Marine Division. The battalion has seen combat in World War I, World War II, the Korean War, the Vietnam War and the Gulf War and has deployed many times in support of Operation Iraqi Freedom and the current War on Terror. Immediately following the 1950 North Korean invasion of South Korea, 2nd Battalion, 5th Marines sailed from Camp Pendleton, California, to defend the Pusan Perimeter as a part of the famous "Fire Brigade". The Battalion also participated in the landing at Inchon, the liberation of Seoul, the Chosin Reservoir Campaign, and the defense of the East, Central, and Western Fronts before the war was over.

The item "WWII 2nd BN, 5th Marines Regimental Battle Flag & UN Flag Korean War 1950-1953" is in sale since Tuesday, July 28, 2020. This item is in the category "Collectibles\Militaria\WW II (1939-45)\Original Period Items\United States\Flags & Banners". The seller is "littlebelleblue" and is located in Chesnee, South Carolina. This item can be shipped to United States.