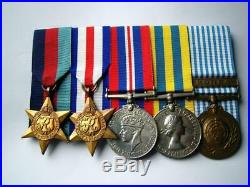 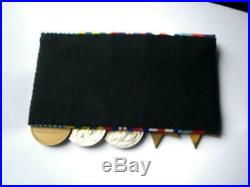 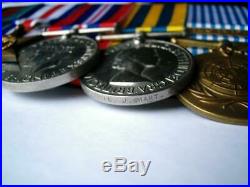 Excellent condition, 1939-45 Star; France and Germany Star; War Medal 1939-45; Korea 1950-53, 1st issue 3327784 Pte. Korea 1950-54, unnamed as issued, mounted court-style for display purposes, good very fine and better Jim Smart joined the Highland Light Infantry in 1943 and when he left the Army in 1948 held the rank of Sergeant. He was called back as a Reservist and fought in Korea with King's Own Scottish Borderers, KSOB. Private Bill Speakman KOSB earned the Victoria Cross for his gallantry while serving with the Battalion, For further research. WW2 & Korean War medals Pte Smart KOSB Victoria Cross action late Highland LI.

WW2 & KOREAN WAR Pte Smart KOSB Late Highland Light Infantry Excellent condition, 1939-45 Star; France and Germany Star; War Medal 1939-45; Korea 1950-53, 1st issue 3327784 Pte. He was called back as a Reservist and fought in Korea with KOSB. Private Bill Speakman KOSB earned the Victoria Cross for his gallantry while serving with the Battalion, For further research British troops crossing the Rhine 1945 The 1st Battalion HLI was part of the 71st Infantry Brigade in the 53rd (Welsh) Division, it later took part in the Normandy landings late in June 1944 and saw action at the Battle of the Bulge in January 1945, the Battle of the Reichswald in March 1945 and the final advance into Germany. British troops Korea 1950-54 - Bazooka team The King's Own Scottish Borderers, KSOB, have two battle honours awarded to the regiment during the Korean war The Battle of Kowang-san Known as Kowang San to the Koreans, it was nicknamed Little Gibraltar by UN troops because of its prominent size and many defensive positions. The hill was located about 40 kilometres north of Seoul and was highly valued because it was the highest ground overlooking the surrounding front lines and supply routes.

The hill was defended by 400 British troops, but attacked by three battalions. Private Bill Speakman KOSB was awarded Britain's Victoria Cross at this battle for his bravery. Speakman had been conveying a supply of grenades to the British troops, on the left hand side of the hill. When the PVA attacked, Speakman took it on his own initiative to gather 6 men, and then began throwing grenades at the PVA. He engaged the enemy with grenades and guns, making repeated charges against them in different directions.

When the men ran out of grenades, they began throwing bottles and metal tea pots from the kitchen supply. This gave time for his unit to withdraw.

Even while wounded in the leg, he continued to charge at the PVA. Create your brand with Auctiva's. Attention Sellers - Get Templates Image Hosting, Scheduling at Auctiva. The item "WW2 & Korean War medals Pte Smart KOSB Victoria Cross action late Highland LI" is in sale since Monday, February 17, 2020.