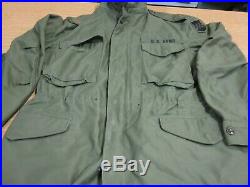 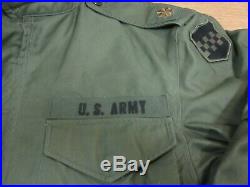 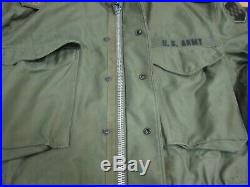 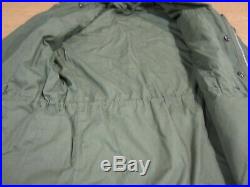 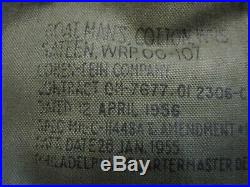 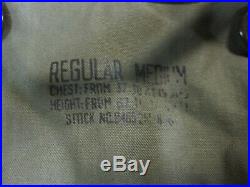 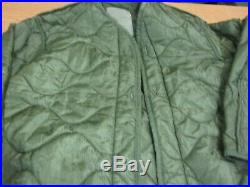 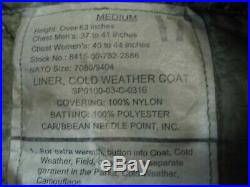 THIS JACKET IS PRISTINE CONDITION NO WEAR WHAT EVER. The M-1951 field jacket was a US Army four pocket jacket made of 9-ounce wind resistant, water repellent treated cotton sateen cloth in Olive Green Shade 107. It was redesignated as the M-1951 field coat in November 1956.

It was still issued in many units as part of the organizational issue. The M-1951 was made from a 9 ounce, weather-resistant fabric and with the exception of snaps and a zipper, largely resembled the M-1943.

Previous efforts to formalize the field jacket had made it less effective than before, so the 51 went back to its roots as a oversize layering piece. The jacket came in the now-famous OG 107 color and had an attachable hood for extra functionality.

Ironically, even though the M-51 was consciously a step away from previous dressy uniforms, many soldiers in later wars preferred it to its successor. The item "VTG MEDIUM REGULAR KOREAN WAR ERA M1951 OG-107 FIELD JACKET WithPATCHES AND LINER" is in sale since Wednesday, October 30, 2019. This item is in the category "Collectibles\Militaria\Korea (1950-53)\Original Period Items".

The seller is "calarmynavy" and is located in California, Pennsylvania. This item can be shipped worldwide.