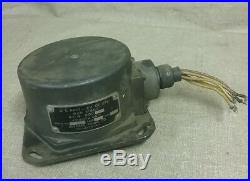 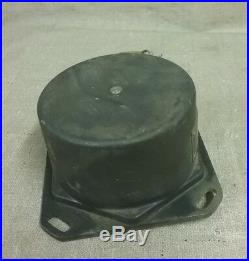 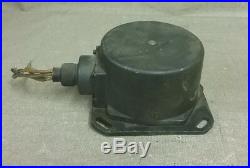 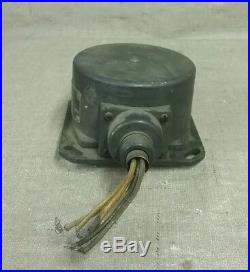 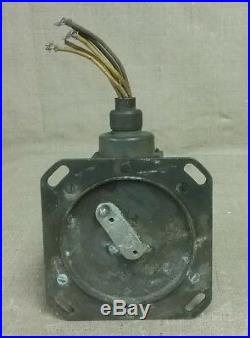 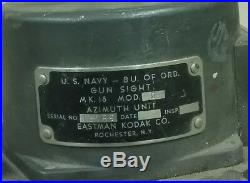 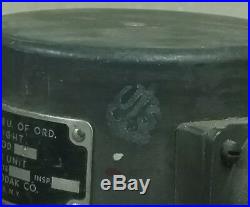 Spectacular WWII/Korean War Vintage US Navy MK 18 Gun Sight Turret Azimuth/Elevation Unit Incredible WWII/Korean MK 18 Gun Sight Turret Azimuth/Elevation Unit The Mk 18 and MK 14 Giro Gunsight was the American Sperry version of the British MK II Gunsight. The Mk 14 was fitted to the Mustang and other US Airforce Fighter aircraft and the MK 18 was the turret version. Both types being used extensively in WWII and the Korean war. Although designed for use in turrets there does seem to be some evidence that they were also occasionally used in some fighters such as the Mustang and the later Sabre jet fighter in Korea. This Gunsight was generally fitted to the Martin 250 CE which is a 24 volt, electrically operated turret containing two. Four ammunition boxes provide 1600 rounds of ammunition. It was mounted on the top of the aircraft, about mid-way down the fuselage.

This turret was used on American bombers such as the A-20 Havoc, B-24 Liberator, B-17 Flying Fortress, and B-26 Marauder. During the war, the Royal Canadian Air Force realized the limitations of their. 303 calibre machine guns and took steps to switch from the hydraulically operated Fraser-Nash mid-upper turrets to the Martin. However, this modification was only included on the last 276 of the 431 Canadian built Lancasters. Stamped US w/Anchor Please see photos for more details Azimuth Unit Please note condition is unknown and not professional tested.

The item "Vintage WWII/Korean War US Navy MK 18 Gun Sight Turret Azimuth/Elevation Unit" is in sale since Monday, August 13, 2018. This item is in the category "Collectibles\Militaria\WW II (1939-45)\Original Period Items\United States\Other US WWII Original Items". The seller is "affordable_parts_sales" and is located in Stanley, Wisconsin.