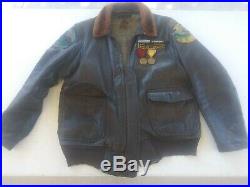 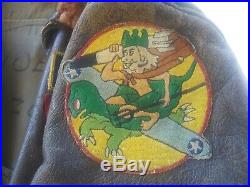 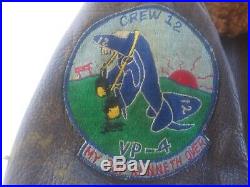 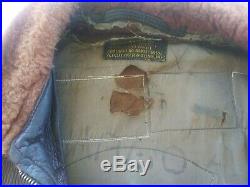 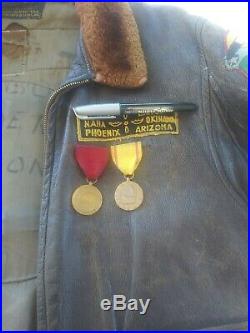 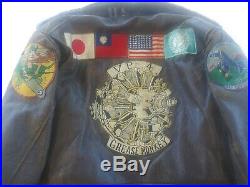 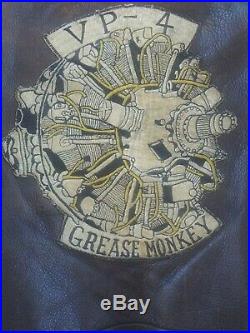 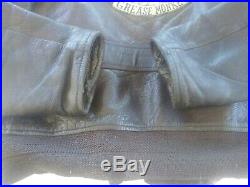 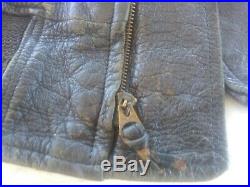 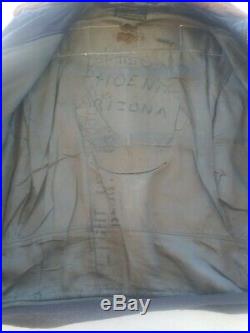 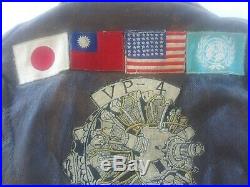 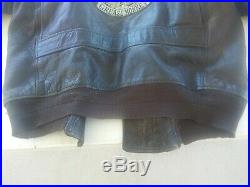 55j14 (AER) Flight Jacket sz 42, manufactured by A. The jacket does not have elastic cuffs I think where taken off to work on engines, and the lining and waist elastic and collar show wear and missing the pocket buttons, there are no holes in the leather, the Conmar zipper zips firmly with no issues, The Jacket has a name badge of Ed Largo and he was in "I believe" he served in WW2 and Korean War and then Stationed in NAHA Okinawa Japan, He was a B-29 Mechanic, Found in the pocket was his Brothers Dog Tag, This jacket shows age and history and I think it is a very Cool... Please view the photo's and read below, Thank you. Jacket measurements are while laying flat. Shoulder to shoulder is 18 1/2....

Armpit to Armpit is 22. Now for the Original and Very Rare Patches.

Left Shoulder is the RARE 5" "Neptune I believe this to be prior to the Patrol Squadron added to the patch. Wings and cape extend the patch. Right Shoulder is the RARE 4 3/4" VP-4 Crew 12 "My Cup Runneth Over Can Not Find Another any where in my research. RARE BACK Patch 9 1/4"X 8 3/8" VP-4 B-29 Engine Mechanic "Grease Monkey". Row of flag patches across the shoulders..

Re-designated Patrol Squadron TWENTY-TWO (VP-22) in 1938, the squadron was nearly destroyed during the Japanese attack on 7 December, 1941. Following the attack, the squadron was reformed, refitted, and called to duty in World War II. While in the defense of the Philippines the squadron lost all but one aircraft leading to the disestablishment of the squadron. This paved the way for the second Patrol Squadron FOUR to be formed. The item "VINTAGE sz 42 USN Korean War Era Leather Flying Jacket G1 EXTREMLY RARE PATCHES" is in sale since Sunday, July 14, 2019.

This item is in the category "Collectibles\Militaria\WW II (1939-45)\Original Period Items\United States\Uniforms". The seller is "namezmudd01" and is located in Mesa, Arizona.