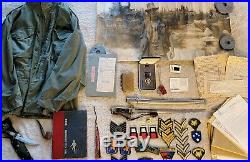 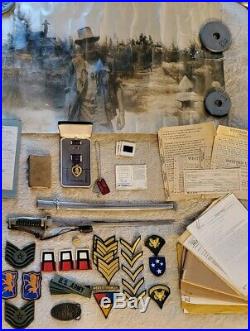 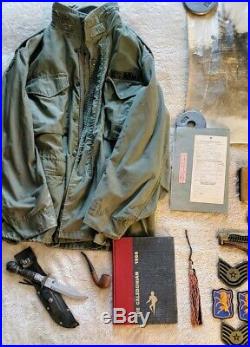 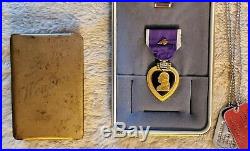 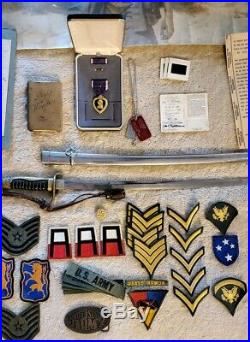 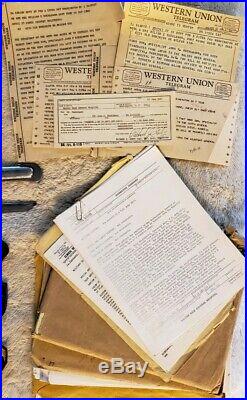 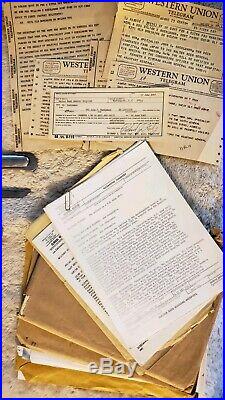 This listing is for the military and personal belongings of a soldier who served in Vietnam and his father that served in the Korean war. They are deceased family members who passed away many years ago and we hope to find someone who will appreciate this as much as they did. With this listing you get his Bible used during the Vietnam war, the Purple Heart he received for injuries during the war, his Vietnam war Army jacket, his Selective Service Classification Card, the military telegrams informing his family of the injuries, a telegram from the Secretary Of The Army, the Walter Reed General Hospital card showing his admittance in 1967, and his medical records pertaining to the injury from the war, medals, rank patches, dog tags, personal belongings like letters and notes, rank patches from the Army and Air Force, a survival knife he used after the war, a very large poster style picture of him in Vietnam, some slides (picture slides) from Vietnam with the dates on the back, his high school yearbook, high school graduation tassel, papers of birth from the hospital he was born at, and his fathers sword from the Korean War. The papers from his birth are NOT a birth certificate.

If you are interested in it or seeing pictures please let me know. The story told to the young kids growing up about the sword was that it was taken from a Korean Police Chief during the war. I may have the Chief title wrong, it could have been something else.

Have not heard the story in a very long time. The sword is the only Korean war item. Everything else is either from the Vietnam war, or leading up to it. He enlisted while still in school and received a belt buckle from the Army for the enlistment. That and his birth papers, high school yearbook and graduation tassel are the earliest items in the listing.

Also included are an old Avon aftershave bottle that I forgot to put in with the pictures. It is an old race car glass decanter.. Everything else is from the Vietnam war and military related. The item "Vietnam Korean War Memorabilia Lot Purple Heart Dog Tags Bible Sword Army Jacket" is in sale since Tuesday, October 29, 2019. This item is in the category "Collectibles\Militaria\Other Militaria".

The seller is "peerless-hockey" and is located in Woodbridge, Virginia. This item can be shipped to United States.