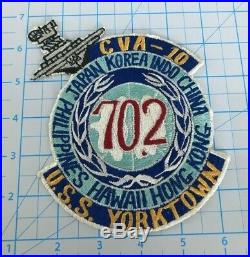 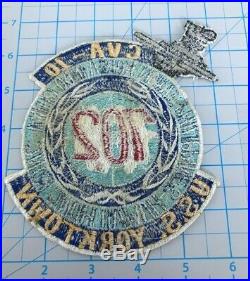 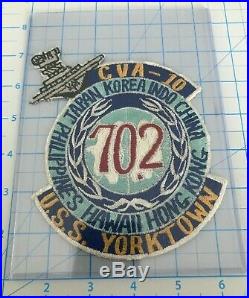 FOR YOUR CONSIDERATION IS A POST KOREAN WAR AND PRE-VIETNAM ERA USS YORKTOWN CVA-10. Task Force 70.2 was organized in 1954 as a response to Chinese Communist aggression towards the Chinese Nationalist held Tachen islands. The Tachen isles are approximately 250 nautical miles north of Taiwan and 20 nautical miles off the coast of China in the East China Sea. Elements of Task Forces 70.2, 72, 73, 75, 76, 77 and Task Group 70.4 assisted in the evacuation of the Tachen Islands and the resettlement of the Chinese Nationalists in neighboring Taiwan.

This patch has been in a my collection for a number of years now and I have since decided to let. A lot of this old stuff go and hand it over to someone else's collection. As you can see from the photographs this patch is 6" tall and a little over 5" wide. The stitching is still strong on the patch and it is clear what the patch says.

Destination in the same condition it is shown here. Great for anyone collecting navy cruise patches or a USS Yorktown veteran. The item "USS YORKTOWN CVA-10 FAR EAST CRUISE PATCH POST KOREAN WAR TASK FORCE 77 TF" is in sale since Sunday, June 28, 2020. This item is in the category "Collectibles\Militaria\1954-60\Original Period Items". The seller is "seth0312" and is located in Cypress, Texas.