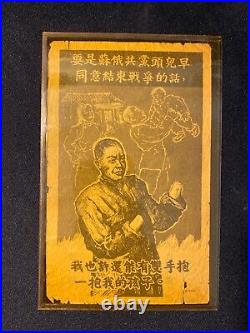 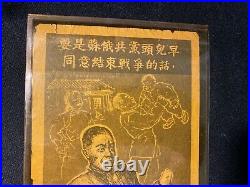 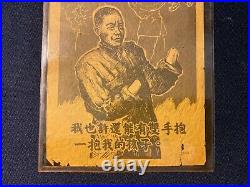 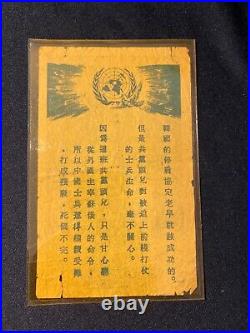 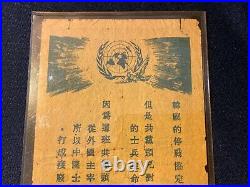 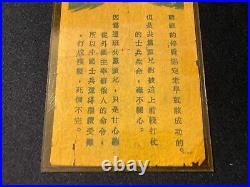 Appears to be a political document regarding the armistice from the Korean war, from. The perspective of the North Koreans or Chinese soldiers. You see a soldier on the front. With no hands dreaming about holding his child again, with the UN logo on the back.

UPDATE, HERE IS A TRANSLATION FROM A NATIVE SPEAKER. Front: If the Soviet Communist Head Honchos Had Agreed to End the War Earlier, I may still have my hands to hug my child. Front: The Armistice in Korean should have succeeded long before.

If the Soviet-Russian Communist Party had. Agreed to end the war.

I might have my leader child? South Korea's armistice was long overdue. Were forced to fight on the front lines. Did not care about the lives of soldiers who.

Because the leaders of the Communist Party are only willing. To take command of the Soviet Russians' orders from the outside: Therefore, the Chinese soldiers have to continue to suffer. Measures approximately 7 1/2 by 4 3/4. This item is in the category "Collectibles\Militaria\Korea (1950-53)\Original Period Items".

The seller is "laz-e-bid" and is located in this country: US. This item can be shipped worldwide.