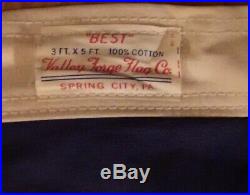 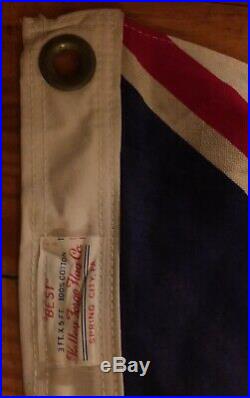 This flag was brought back by a US Marine on his way back from the Korean War, CIRCA 1953. PLEASE NOTE IF THIS IS A GIFT AND IT CAN BE WRAPPED. Manufactured by Valley Forge in the early 1950's. Cotton Bunting, Canvas Header, Brass Grommets. Multiple seams in upper & lower header dates this flag in the early 1950s in that there are no Stamps on header.

Practice stopped in late 1940s. The tag also doesnt have a Zip Code that was established and used on Valley Forge label in 1963. The amount of Seams in the header were reduced to single rows of stitching in the mid to late 1950s.

This is also seen on Annin flags of the same period. This flag absolutely is from the late 1940s to early 1950s marching the Providence to a T.

The rest of the flag is crisp. Government contract piece manufactured by Valley Forge Flag Company in the late 1940s through early 1950s. The inclusion of an emblem of a foreign country, the Union Flag of the United Kingdom, is a mark of the British Empire's historical relations with the Hawaiian Kingdom, and particularly with King Kamehameha I.

The colors were standardized in 1843, although other combinations have been seen and are occasionally still used. Marine Corps facility and air station located on the Mokapu Peninsula of windward O'ahu in the City & County of Honolulu. For census purposes, the area is demarcated as the Kaneohe Station census-designated place, with a population at the 2010 Census of 9,517. The United States Marine Corps operates a 7,800-foot (2,400 m) runway at the base.

MCBH is home for the 3rd Marine Regiment, Marine Aircraft Group 24, Combat Logistics Battalion 3 (CLB-3) 3rd Radio Battalion, and the Navy's Patrol and Reconnaissance Wing 2. The base lies between the two largest windward O'ahu communities of Kailua and Kne'ohe, and the main gate is reached at the eastern end of Interstate H-3. The main access to the base is by either H-3 or Mokapu Road. Two areas of the base are classified conservation land which includes the Ulupa'U Crater area (northeast peninsula) and the Nu'upia Pond area (at the Mokapu Road). In 1951, the Marines assumed control of the air station activities when naval aviation moved to Barbers Point Naval Air Station. On January 15, 1952, Marine Corps Air Station Kaneohe Bay was commissioned. MCAS Kaneohe Bay, Camp H. Pacific Command (USPACOM) which is headquartered at Camp H.

In 2010, parts of the movie Battleship were filmed aboard MCBH. The item "TERRITORIAL FLAG OF HAWAII, KOREAN WAR (US INVOLVEMENT 1951-53) GSA VALLEY FORGE" is in sale since Monday, December 9, 2019. This item is in the category "Collectibles\Militaria\Korea (1950-53)\Original Period Items". The seller is "littlebelleblue" and is located in Chesnee, South Carolina. This item can be shipped to United States.