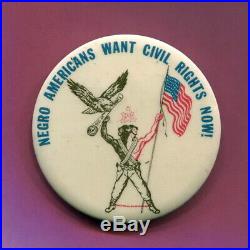 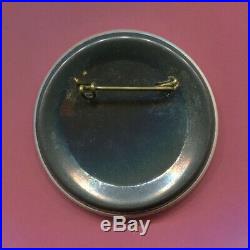 OFFERED FOR SALE IS THIS 21 1/2 INCH CELLULOID PINBACK BUTTON IN WHAT I BELIEVE TO BE REALLY GREAT SHAPE. HOWEVER, SEE PHOTOS FOR CONDITION, AND YOU BE THE JUDGE. GUARANTEED AUTHENTIC AND ORIGINAL AS DESCRIBED. Check out my other Political and Social Protest and Cause items.

This very scarce pin was issued circa 1950 - 1951 in opposition to segregation of white from black soldiers in the Army fighting in Korea, and denial of civil rights at home in the United States. At the end of June 1950, when the Korean War started, most black soldiers still served in segregated support units in the rear. Despite the fact that in. Truman's Executive Order 9981 ordered the integration of the armed forces.

It was not until July 26, 1951 , the US Army formally announced its plans to desegregate , exactly three years after Truman issued Executive Order 9981. The pin has incredible graphics with a black serviceman in uniform, literally torn between serving his country in Korea and receiving civil rights in the armed services and at home.

The obtaining of civil rights is represented by an American bald eagle delivering a copy of the Bill of Rights to the black soldier. The pin reads: NEGRO AMERICANS WANT CIVIL RIGHTS NOW!

The curl of the pin states: U. [design patent] APPLIED FOR, LOUIS UDELL GUTHIRE. Special Assistant in the White House Office, 1946 to 1952. That are identified on the internet includes a letter sent by Louis Udell Guthrie to President Truman in 1951 " Regarding the Negro and the Korean War ". African-Americans in the Korean War. July 26, 1948 was a red-letter day in American history. President Harry Truman signed Executive Order 9981 , desegregating the armed forces.

Truman declared, there shall be equality of treatment and opportunity for all persons in the armed services without regard to race, color, religion or national origin. The president acted upon the wishes of many people, black and white, who believed that if African-Americans and other people of color served their country with honor, they should not be subjected to racial discrimination or violence. Throughout his term in office, many African-American servicemen wrote the president about their harrowing experiences.

Perhaps the most influential letter came from Isaac Woodard, Jr. A World War II veteran who, hours after being honorably discharged from the U. Army, was dragged off a bus and beaten until blind by police in Batesburg, South Carolina.

Those stories had a profound effect on the president, who had grown up in a segregated Missouri town, and who had exhibited profound racism himself throughout his life. In response to Woodards blinding, Truman declared , When a Mayor and City Marshal can take a negro Sergeant off a bus in South Carolina, beat him up and put out one of his eyes, and nothing is done about it by the State authorities, something is radically wrong with the system. Trumans bold action on civil rights was one factor leading to his upset defeat of Republican Thomas Dewey in the 1948 presidential election. Just two years after Truman issued Executive Order 9981 , North Korea invaded South Korea , putting the new policy to the test. Though the order had come from their Commander in Chief, many senior American military commanders simply ignored it.

They had spent their entire careers training and fighting in a segregated army and werent going to integrate their units without a fight. So, even though the armed forces had officially been desegregated, artillery units like the 503rd Battalion remained all black. The war was incredibly difficult for black soldiers.

In 1950 , American military commanders arrested fifty members of the all-black 24th Infantry Regiment and falsely accused them of going AWOL (Absent Without Leave) and cowardice in the presence of the enemy. Their hearings lasted as little as ten minutes. Thurgood Marshall , who went on to successfully argue Brown v. Board of Education of Topeka in front of the Supreme Court, and to become the first African-American Supreme Court justice himself, recalled, [One of the men] produced two witnesses [stating that he had not gone AWOL]: a major in the Medical Corps and a lieutenant in the Nurse Corps, both of whom testified that he was in a base hospital the very day that he was supposed to be AWOL.

And despite their testimony, he was convicted and given life imprisonment. Recalled that General MacArthur, who believed that African-Americans were inferior to whites, was the greatest impediment to the Armys desegregation in Korea. Things changed rapidly as soon as Truman fired him in 1951. General Matthew Ridgeway took command of UN forces and actively promoted the desegregation of all units.

So, though African-American troops encountered terrible racism, discrimination and violence during the Korean War, things had begun to change by the end of hostilities in 1953. The struggle for military integration in Korea mirrored similar struggles on the home front toward the integration of American society as a whole. This underground pinback button pin or badge relates to the Hippie (or Hippy) Counterculture Movement of the psychedelic Sixties (1960's) and Seventies (1970's).

That movement included such themes and topics as peace, protest, civil rights, radical, socialist, communist, anarchist, union labor strikes, drugs, marijuana, pot, weed, lsd, acid, sds, iww, anti draft, anti war, anti rotc, welfare rights, poverty, equal rights, integration, gay, women's rights, black panthers, black power, left wing, liberal, etc. Progressive political movement and is guaranteed to be genuine as described. The strategy and methods that the Deacons employed attracted the attention and concern of the Federal Bureau of Investigation (FBI), which authorized an investigation into the groups activities. The investigation stalled, however, when more influential black power organizations such as US and the Black Panther Party. Emerged after the 1965 Watts Riot. With public attention, and the attention of the FBI focused elsewhere, the Deacons lost most of their notoriety and slowly declined in influence. By 1968 they were all but extinct. In 2003 the activities of the Deacons was the subject of a 2003, Deacons for Defense.

On July 10, 1964, a group of African American men in Jonesboro, Louisiana. Led by Earnest Chilly Willy Thomas and Frederick Douglas Kirkpatrick founded the group known as The Deacons for Defense and Justice to protect members of the Congress of Racial Equality (CORE). Against Ku Klux Klan violence. Most of the Deacons were veterans of World War II. The Jonesboro chapter organized its first affiliate chapter in nearby Bogalusa, Louisiana led by Charles Sims, A.

Eventually they organized a third chapter in Louisiana. The Deacons tense confrontation with the Klan in Bogalusa was crucial in forcing the federal government to intervene on behalf of the local African American community. The national attention they garnered also persuaded state and national officials to initiate efforts to neutralize the Klan in that area of the Deep South. The Deacons emerged as one of the first visible self-defense forces in the South and as such represented a new face of the civil rights. Traditional civil rights organizations remained silent on them or repudiated their activities.

They were effective however in providing protection for local African Americans who sought to register to vote and for white and black civil rights workers in the area. The Deacons, for example, provided security for the 1966 March Against Fear from Memphis to Jackson, Mississippi.

Moreover their presence in Southeastern Louisiana meant that the Klan would no longer be able to intimidate and terrorize local African Americans without challenge. THIS IS MY HOBBY AND IS NOT A BUSINESS. IF YOU ARE NOT A MEMBER, YOU SHOULD CONSIDER JOINING. IT IS A GREAT ORGANIZATION!

THANK YOU FOR YOUR INTEREST. The item "SCARCE 1950-51 CIVIL RIGHTS KOREAN WAR Integration of Army Equality at Home Pin" is in sale since Friday, April 24, 2020. This item is in the category "Collectibles\Historical Memorabilia\Political\US\Peace & Anti-War Movements". The seller is "causenik" and is located in Ojai, California. This item can be shipped worldwide.