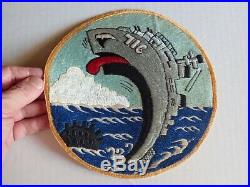 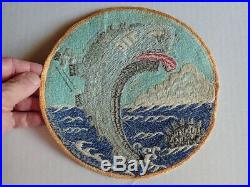 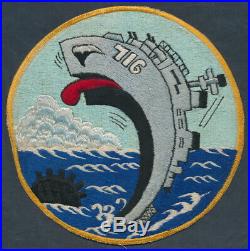 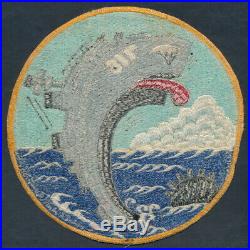 This is one of many great vintage & antique items I'm currently listing from various estates. Please take a look at my other merchandise at your leisure. Large Vintage Korean War Japan-Made Patch USS Wiltsie / DD-716. Large 8 Inch Korean War Patch for the US Navy Destroyer USS Wiltsie (DD-716). A mine is hidden in the blue waves. I base the age on two factors: one is the mine in the water, the other is another USS Wiltsie patch I've listed reads DesDiv 111.------------------------ Wikipedia : In July 1950, Wiltsie sailed for the Far East to augment the American naval presence in Korean waters. Clark, Commander, Destroyer Division 111 , embarked in the recently arrived Wiltsie, assumed direction of the embarkation operation for the Republic of Korea (ROK) troops. He ordered the four LSTs to beach at a pre-arranged site, guided in by jeep headlights from shore. Before sunrise the next day, 327 officers and 3,480 soldiers of the 3rd ROK Division, 1,260 civilians, and 100 vehicles had been loaded. American forces went ashore at Inchon on 15 September 1950. Wiltsie participated in one phase of this assault, screening the fast aircraft carriers of Task Force 77 (TF 77) USS Philippine Sea, USS Valley Forge, and USS Boxeras their aircraft hit enemy ground targets to support the advance of troops ashore. For the remainder of the deployment, Wiltsie supported United Nations troops ashore with call-fire support; screened TF 77 as it conducted air strikes against supply lines and troop concentrations; and patrolled in the Taiwan Strait. Highlighting her blockading activities of Wonsan, Wiltsie fired retaliatory gunfire missions against enemy shore batteries. After leaving the west coast on 2 January 1953, the destroyer patrolled the Formosa Strait for a time and operated off the North Korean coast before shifting to Wonsan. The Navy continued it operations to support UN ground troops, interdicted enemy supply lines by air and by surface gunfire, and blockaded the enemy's coasts. Eight days after Wiltsie and USS Theodore E.

Chandler had destroyed a train near Tanchon on 3 June, enemy shore batteries took Wiltsie under fire off Wonsan, lobbing 45 105-millimeter (4.1 in) shells in her direction, scoring a hit on the destroyer's fantail. On 15 June, Wiltsie evacuated 13 Korean civilians from Yo-do Island to Sokcho-ri. While preparing to abandon the Wonsan siege in accordance with the armistice stipulations, Wiltsie screened minesweeping operations and joined in the last-minute shelling of enemy ground targets. In company with USS Porter and USS Bremerton, Wiltsie shelled targets at Wonsan until a few minutes before the 2200 deadline.

On 27 July 1953, the Korean armistice finally came into effect. However, Wiltsie remained in Korean waters, screening the continuing minesweeping operations between Hungnam and Wonsan until 6 August 1953. Patch Measures 8 Inches Diameter. The item "Rare Korean War 8 Patch USS WILTSIE DD-716 US Navy Destroyer, Japan Made" is in sale since Wednesday, November 6, 2019. This item is in the category "Collectibles\Militaria\Korea (1950-53)\Original Period Items". The seller is "coyotechrist" and is located in Anaheim, California.