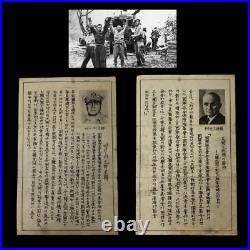 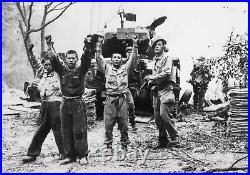 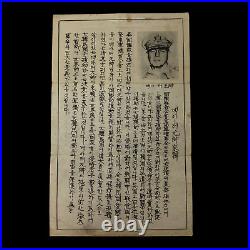 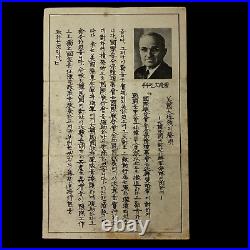 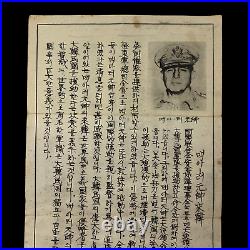 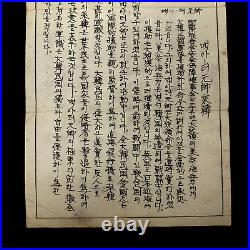 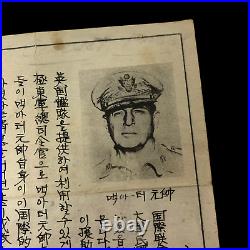 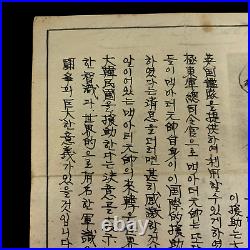 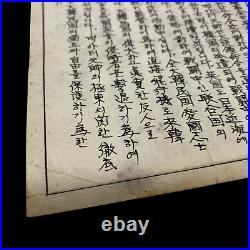 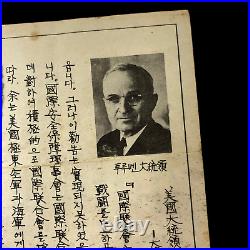 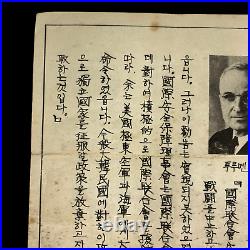 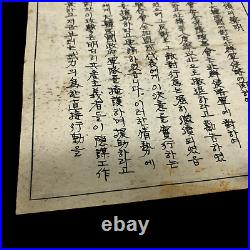 This very rare early Korean War'Propaganda Surrender Leaflet #1002' was dropped over known enemy (North Korean) locations and combat areas. Some of the earliest known Korean War leaflets depicted General MacArthur in an attempt to boost the morale of the South Koreans and assure them that an almost infallible and undefeatable military leader was coming to their defense. This leaflet depicts an incredible double-sided printing of not only the heroic MacArthur legend but also the United States President Harry Truman.

These varied messages are were meant similar to WWII propaganda and surrender leaflets to sway the enemy through propaganda-type messages. Some of the MacArthur text translates is.

All patriotic Koreans will take heart at the news that general MacArthur himself has flown to Korea to give his personal supervision to this international aid. His vast knowledge of the far East, as well as his world famed military genius, will be of tremendous value in the struggle to defend Korean independence and freedom. Following the North Korean invasion of the South in 1950, President Truman created the Psychological Strategy Board (PSB) to handle national PSYOP policy. In June 1951, after a year of the Korean War, the United States Army established a special staff agency, the Office of the Chief of Psychological Warfare (OCPW), headed by Brigadier General Robert A. McClure, to supervise its psychological warfare operations.

In World War II, McClure had been head of the Psychological Warfare Branch of the Allied Forces Headquarters in North Africa and then the Psychological Warfare Division of SHAEF in London under Eisenhower. In April 1952, McClure established the Psychological Warfare Center at Fort Bragg, North Carolina, which has become the Army's principal training ground for PSYOP personnel. However, during the Korean War, control of PSYOP operations evolved continually and with various lines of responsibility as the Army adopted ad hoc tactics to cope with its lack of preparedness.

This item is in the category "Collectibles\Militaria\Korea (1950-53)\Original Period Items". The seller is "premierrelics" and is located in this country: US. This item can be shipped worldwide.