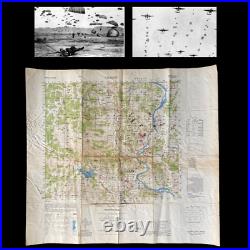 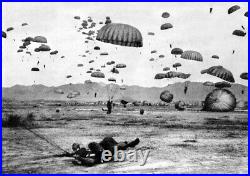 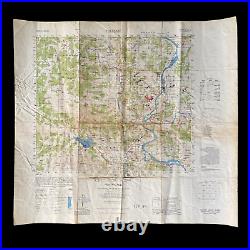 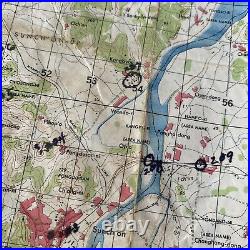 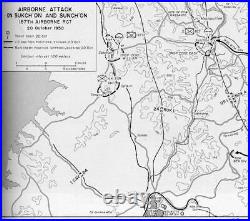 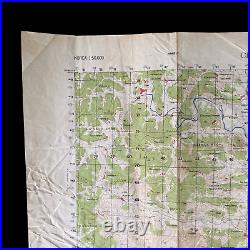 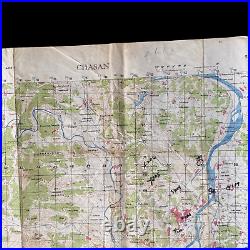 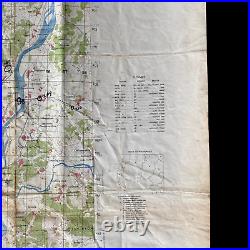 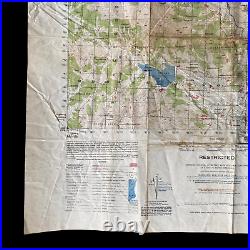 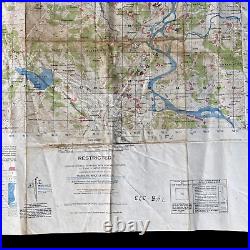 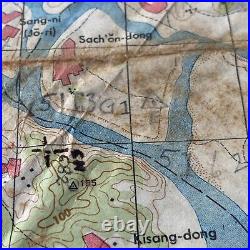 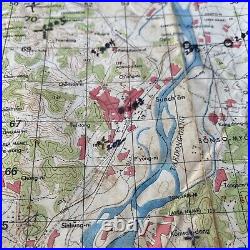 This extremely rare airborne jump-map is one of the rarest Korean War maps to ever surface from one of the most famous airborne operations and POW rescues ever. This map was used during the airborne combat jump on 20 October 1950 at Sunchon. ASSAULT ON SUKCH'ON AND SUNCH'ON. The mission was to cut the road north going to China, preventing North Korean leaders from escaping from Pyongyang; and to rescue 2,000 US prisoners of war. VERY RARE and heavily marked Korean War artillery map of the 674th Airborne Field Artillery Battalion. This map shows lots of battle use with an outstanding amount of artillery target designations on enemies in the area.

It is very rare to find an operationally marked map like this. This incredible Korean War artillery map was used by John L. Booge of the 674th Airborne Field Artillery Battalion.

Serving as an artilleryman supporting the 187th Airborne Regimental Combat Team, Booge used this map during intense combat operations in some of the most intense battles and operations of the Korean War. Booge was extremely fortunate to survive the war and send home what are believed to be almost all of the operational theater artillery maps he used during the war addressed to his wife Mrs. Gertrude Booge in Pasadena, California.

This rare "RESTRICTED" marked special artillery map is dated 1950 and titled CHASAN. This map was produced very meticulously with each square, color variation, and line designations specially placed to provide artillerymen with the most accurate firing sectors for easy and fast-firing adjustments. RAKKASAN ASSAULT ON SUKCH'ON AND SUNCH'ON.

Delayed by heavy rain at Taegu, South Korea, the 187th Airborne Regimental Combat Team (ARCT-"Rakkasans"), did not conduct parachute assaults on Sukch'on and Sunch'on until late morning 20 October 1950. The drop zones were adjacent to the railway lines going north from P'yongyang, the North Korean capital. The primary mission of the 187th was to cut off and then contain two North Korean divisions as part of the Eighth U. Army and ROK offensive into North Korea following the successful UN landing at Inch'on and the breakout from the Pusan Perimeter.

The 674th Airborne Field Artillery Battalion (apart of the 187th Airborne Regimental Combat Team) made their first of two combat jumps during the Korean War on 20 October 1950 at Sunchon and Sukchon. The mission was to cut the road north going to China, preventing North Korean leaders from escaping from Pyongyang; and to rescue US prisoners of war.

At month's end, UN forces held 135,000 KPA prisoners of war. As they neared the Sino-Korean border, the UN forces in the west were divided from those in the east by 80-161 km (50-100 mi) of mountainous terrain. In addition to the 135,000 captured, the KPA had also suffered some 200,000 men killed or wounded for a total of 335,000 casualties since the end of June 1950, and had lost 313 tanks (mostly T-34/85 models). A mere 25,000 KPA regulars retreated across the 38th Parallel, as their military had entirely collapsed. The UN forces on the peninsula numbered 229,722 combat troops (including 125,126 Americans and 82,786 South Koreans), 119,559 rear area troops, and 36,667 US Air Force personnel. The Sukch'on/Sunch'on airborne assault was the first time that heavy equipment was para-dropped in combat, and the first use of C-119 Flying Boxcar transports for a combat parachute operation. On 20 October and the days afterward, about four thousand troops and six hundred tons of equipment and supplies were dropped at Sukch'on and Sunch'on. This included twelve 105 mm howitzers, thirty-nine Jeeps and trailers, four 40 mm antiaircraft artillery guns, four ¾-ton trucks, and 584 tons of ammunition, gasoline, water, rations, and other supplies. The Rakkasans arrived too late to contain the North Korean divisions and rescue the American POWs. The trail elements of the enemy units were a full day ahead on the north side of the Chongchon River. Communist Premier Kim Il Sung and his government had fled P'yongyang on 12 October for Manpojin on the Yalu River. Far East Command intelligence was seven to ten days old. When the Rakkasans were ordered to P'yongyang on 23 October, they had accumulated thirty-eight hundred prisoners, killed between two and three thousand North Korean soldiers, and suffered a hundred casualties. Unfortunately, the remaining UN prisoners had been taken from their train and machine gunned by their guards before dawn on 20 October-at the same time the 187th was preparing for the parachute assault.

Exerpts from the book Striking Back: Combat in Korea, March-April 1951 which highlights the heroic actions of the 674th Airborne Field Artillery Battalion. 187th Airborne Regimental Combat Team, 24-25 March 1951 pp. Word was received from I Corps at 1110 hours ordering the 187th to move immediately to the vicinity of Sinch'on. The S-3 alerted all units and directed them to recall their patrols, move into a tight bivouac, and prepare to move to new positions by foot. The 674th Airborne Field Artillery Battalion was notified to carry all ammunition possible with what transportation was available.

At this time, transportation was critically short due to the fact the land tail had not as yet accomplished their linkup. The land tail was not late in arriving, however.

The move was ordered prior to... Chapter 8 CUTTING THE UIJONGBU ROAD: 187th Airborne Regimental Combat Team, 26-28 March 1951 pp. Holland, executive officer, 1st Battalion: On 26 March at 0700 hours the 1st Battalion, under supporting fires from the 674th Airborne Field Artillery Battalion and the 81mm and 60mm mortars of the 1st Battalion, jumped off in the attack. Two reinforced squads from the 3d Platoon of Company A took Hill 203 unopposed. The 3d Platoon of Company A remained on the hill to secure the left flank of the battalion attack.

The 1st Battalion fought an all day firefight from 0700 to 1500 for Hill 178. Companies B and C attacked, and the remainder of Company...

POWs believed to be with those forces. The drop included a number of firsts, including the first combat drop from C-119s and the first successful heavy drop of 105mm howitzers, jeeps and other equipment. During the Eighth Army's retreat after the Chinese intervened, the 187th and the British Commonwealth Brigade served as the Eighth Army's rearguard. Throughout the rest of the Korean War, the 187th and 647th FABN saw heavy fighting, particularly at Wonju in February 1951. In March 1951, the RCT made another airborne assault at Munsan-ni. In 1952, the 187th was withdrawn to Japan as part of the U. Troops later helped subdue POW camp riots in June 1952. For its service in Korea, the Rakkasans were awarded four unit citations, and three soldiers were awarded the Medal of Honor. In total, the 187th suffered 2,115 casualties in Korea, including 442 killed in action. This item is in the category "Collectibles\Militaria\Korea (1950-53)\Original Period Items". The seller is "premierrelics" and is located in this country: US.