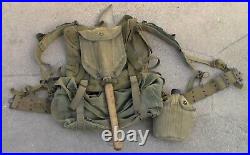 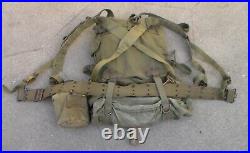 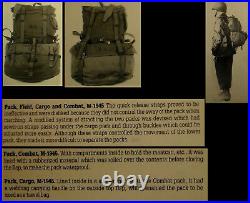 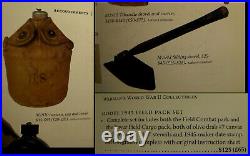 This type of Backpack was used from WW2 to the Korean War, and also to the Vietnam War era. This backpack is mostly American Military parts, but has some South Korean Military M-1944 Suspenders made of synthetic materials that are Post-Korean War era. The South Korean Military also used these backpacks. The Combat Pack Top, and Caro Attachment Bottom are both Korean War vintage. The M-1936 Pistol Belt is dated 1945. The M-1910 Canteen Cover has had all the printed markings fade away. The M-1910 Canteen is dated 1943. There is a Canteen Cup dated 1945. The Shovel Cover is dated 1945 and has period stitching repairs.

The M-1943 Folding Shovel is dated 1944. This Backpack is old and in Used Condition, with wear damage from use. There are some dirt stains, and sun fading from use, as well as scratches, paint loss, and oxidation to the metal parts, etc. The Combat Pack Top has interior rubberized lining that is cracked and flaking. The Cargo Attachment Bottom also has cracked and flaking interior rubberized material.

The Cargo Attachment Bottom has some rip hole damage. I show some photos from Reference books that have information about these types of vintage Military issue items. The reference books are not included for sale. Only the Backpack, Shovel, Belt, and Canteen are offered for sale. For Legal reasons, the items in this listing are stated as "Used Condition".

What is a "Used Condition" item? It is an item that is in "Poor Terrible Condition". They are better condition than "Dug Relic Condition" items. Items are no longer like how they were the day they were first manufactured. Items have been used by someone Decades ago in another Century.

The local Post Office gives those boxes out to use. They have lost items I have mailed. It takes between 3 to 5 days for funds to transfer to my bank account.

I'm trying to be 100% up front and honest. I mostly only leave other people feedback after they leave me feedback.

Chances are, if you don't leave me any feedback I'll probably not leave you any either. I try to be 100% Honest and show photos and describe items the best I can. Items tend to be old, used, and as is. Feel free to ask me a question.

Please do not ask me to take more photos, because I probably won't take any more photos of things I have already stored away. South Korean Military / US Korean War era WW2 style M-1945 Backpack USED" is in sale since Wednesday, March 24, 2021. This item is in the category "Collectibles\Militaria\Korea (1950-53)\Original Period Items". The seller is "clayandmilitaria07" and is located in Stockton, California. This item can be shipped to North, South, or Latin America, all countries in Europe, all countries in continental Asia.