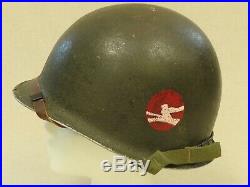 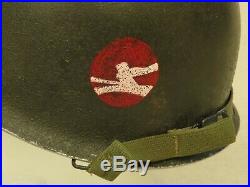 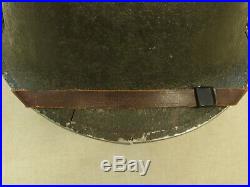 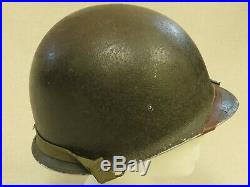 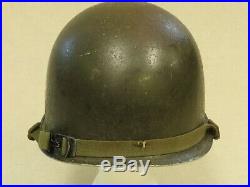 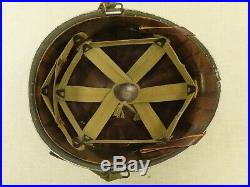 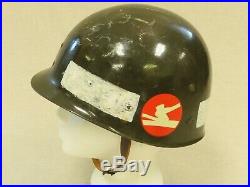 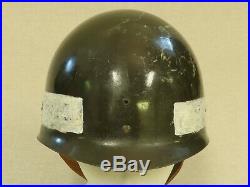 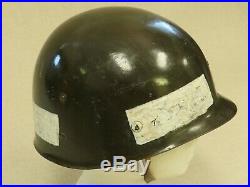 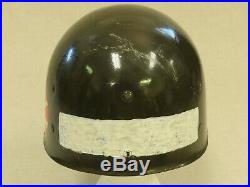 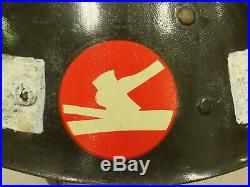 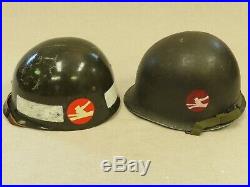 For sale is an original U. M1 combat helmet with the 84th Infantry Division insignia on both the shell and liner. The 84th Infantry Division nicknamed "The Railsplitters" entered combat in November of 1944 in Germany in the Roer Valley. The 84th fought all over Germany and then in Belgium at The Battle of The Bulge. After the Bulge they crossed the Rhine into Germany to fight thru multiple German towns all the way to the Elbe river where they met the Soviet advance.

The 84th was in the thick of the fighting in Germany in 1944 and 1945 and became well-known for their excellent combat record. After "VE Day" they remained on occupation duty until January of 1946, when they were demobilized. This very cool 84th Infantry Division M1 helmet is a later WW2-production example with a front seam and swivel bales, instead of the fixed bales seen on early production helmets. The original paint is dark green with a course texture in good condition. It has the sewn-on chinstraps with blackened steel buckles and has "189" stamped in the inside front over an "S" in a tall narrow font.

It is in good condition overall inside and out but has a small stress crack in the right front brim area that is causing the alloy protective rim to separate slightly at the front-seam. This is extremely common on these front-seam WW2 M1 shells from what we have read.

The hand-painted "Railsplitter" 84th Infantry insignia on the left side looks great and shows consistent wear with the rest of the helmet, but I have no way to know for sure whether it was painted on during WW2, the Korean War, or later. There is a close-up picture provided of this insignia to see the details/wear. The liner in this helmet is a high pressure "tortoise shell" model made by International Molded Plastics Co. And is painted with white bars around the rim with an 84th Infantry Division insignia decal on the left side (Korean War paint/decal). The liner is complete except for the removable leather sweat band which is missing.

The pictured liner chinstrap is wrong for the helmet and has been replaced with a correct U. As you can see from the pictures, one of the webbing straps has the G. S name and military ID number written on it that is still partially legible (with the right magnification and light it might be possible to make it out fully). All of the webbing appears to be original and in good condition, including the hardware that attaches it to the liner. This is a very cool U.

Army helmet with insignia, and unique in that the liner has matching insignia. It came to us from an estate in which the family had a immediate family member that fought in the 84th Infantry Division as a combat engineer in World War 2, but there was no information with it in regards to if it was the father's actual combat helmet or how it was acquired. If you have been looking for a neat new addition to your WW2/Korean War militaria collection this M1 helmet would be an excellent choice. Not only will it display nicely as a complete M1 helmet, but both the liner and shell are both worthy of display separately. The item "Original WW2/Korean War U.

M1 Helmet The Railsplitters" is in sale since Monday, October 28, 2019. This item is in the category "Collectibles\Militaria\WW II (1939-45)\Original Period Items\United States\Hats & Helmets". The seller is "antique_modern" and is located in Nicholasville, Kentucky. This item can be shipped to United States.