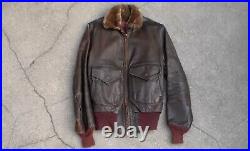 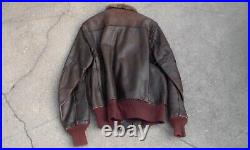 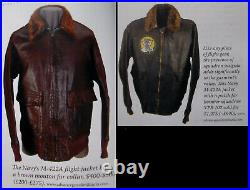 The leather Fighter Pilot's jacket is a M-422A type of flight jacket. There are no Quartermaster tags with date and size information. I do not know what size this jacket is. It is probably a small size.

Military likes to make soldiers exercise to be physically fit. Most Military clothing tends to be small sizes.

Only the Second World War to Korean War era Navy Fighter Pilot's jacket is offered for sale. It is old and in Used Condition, with wear damage from use. There is very minor damage to the knitted cuffs and other parts of the jacket. It doesn't have as many moth holes as other jackets I have seen. Mostly the knitted wool parts have dirt stains. The leather is old and dried out. The leather of the jacket seems less flexible, due to being dried out. There is sun fading, dirt stains, scratches, paint loss, and oxidation to the metal parts. This is for sale "As Is", as an old relic collectable only. It is not for sale as wearable clothing, or as a usable item.

It is an old relic collectable. I don't care what size it is at all. I do not know how to do measurements, so don't bother asking for measurements.

I have seen other uniforms that Officers had custom tailor made to fit them. I know it is not a latter 1960s Vietnam War era jacket. The Vietnam War era jackets have black fur collars, and the older jackets have brown fur collars. Many Military items also got made by many different manufacturers, and there was variation in construction of items between manufacturers. I showed photos from a reference book that had information about this type of item.

Items have been used by someone Decades ago in another Century. Items will have defects and damage from having been used.

The older something is, the worse the condition will be. Wool items will have Moth holes. Expect Moth damage to old wool items.

Expect size tags to be missing or damaged. Expect leather items to be dried out and cracked.

Hats will be crushed and bent out of shape. Do not expect clothing to fit you, it is not your size. Expect oxidation and rust on the metal parts. Expect items to be faded from having been exposed to sun light. Expect metal items to have dents, scratches, and paint loss.

Expect items to have microscopic fractures when looked at under a microscope. Expect Electronic items to no longer work or be functional. These items are old and things slowly get destroyed by time. Please do not expect something in "New Condition", or "Good Condition".

These items are in "Used Condition", and are Relics from another Century. The vintage items I list for sale are not wearable clothing, or usable items. These items are old and damaged from use. The item was rough weighed in an open box. I have mailed items in the past to: Brazil, United Kingdom, France, Italy, Netherlands, Australia, Canada, Malta, Hungry, Belgium, Taiwan, etc.

The local Post Office gives those boxes out to use. They have lost items I have mailed. It takes between 3 to 5 days for funds to transfer to my bank account. I'm trying to be 100% up front and honest. I mostly only leave other people feedback after they leave me feedback. Chances are, if you don't leave me any feedback I'll probably not leave you any either. I try to be 100% Honest and show photos and describe items the best I can. Items tend to be old, used, and as is. Feel free to ask me a question.

Please do not ask me to take more photos, because I probably won't take any more photos of things I have already stored away. The item "Old US WW2 to Korean War era USN Navy M-422A Pilot's Leather Flight Jacket USED" is in sale since Wednesday, January 27, 2021. This item is in the category "Collectibles\Militaria\WW II (1939-45)\Original Period Items\United States\Uniforms". The seller is "clayandmilitaria07" and is located in Stockton, California. This item can be shipped worldwide.