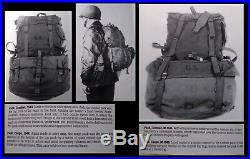 The Combat Backpack top was a M-1945 backpack, dated 1951. The Cargo Attachment bottom is a M-1945 Cargo Attachment, dated 1951. Some of the markings are faded. Both the top and bottom have the rubberized interior lining, but the cargo attachment lining is old and has crack and flaking. Both the top and bottom parts have the printed instruction panels. The backpack has some M-1944 Suspenders, dated 1945. The markings are faded on the suspenders. There is a 1944 dated M-1943 Folding Shovel in a 1944 dated shovel cover. There is a M-1936 Pistol Belt with faded markings.

There is a light khaki WW2 era pistol ammo pouch with faded markings. There is a M-1910 Canteen. Both the Canteen and cover are dated 1945. I do not have a canteen cup. There is a 1945 dated Mess Kit, without the utensils.

They are in Used Condition with wear damage from use. Some straps are missing the metal ends. There are some vintage 1950s to 1960s era Surplus Store prices marked on some of the items. There are also some soldier name markings, as well as an "E Troop" marking.

California: Unfortunately, I do not sell to anyone inside the state of California. I only do outside California sales.

Items are no longer like they were the day they were first manufactured. Items have been used by someone Decades ago in another Century. Items will have defects and damage from having been used.

The older something is, the worse the condition will be. Wool items will have Moth holes. Expect Moth damage to wool items.

Expect buttons to be broken or missing. Expect zippers to be broken and non functional. Expect size tags to be missing or damaged. Expect leather items to be dyed out and cracked. Hats will be crushed and bent out of shape.

Do not expect clothing to fit you, it is not your size. Expect oxidation and rust on metal parts. Expect items to be faded from having been exposed to sunlight. Expect metal items to have dents, scratches, and paint loss. Expect items to have microscopic fractures when looked at under a microscope. Expect electronic items to not longer work or be functional. These items are old and slowly get destroyed by time. Please do not expect something in "New Condition", or "Good Condition". These items are in "Used Condition", and are relics from another Century. The vintage items I list for sale are not wearable clothing, or usable items.

If I see a size marking on an old Quartermaster Tag, I will try to show a photo of it. If I say that I do not know the size than please do not waste both of our time by asking about the size of an old militaria collectable. I also tend to have items packaged away to try and keep moths from eating them. I only dig them out if they sell and need to be mailed. Please do not ask me to take more photos, because I probably won't take any more photos of things I have already stored away. It is an item that is in "Poor Terrible Condition". They are better condition than "Dug Relic Condition" items.

Items are no longer like how they were the day they were first manufactured. Expect Moth damage to old wool items.

Expect leather items to be dried out and cracked. Expect oxidation and rust on the metal parts. Expect items to be faded from having been exposed to sun light. Expect Electronic items to no longer work or be functional. These items are old and things slowly get destroyed by time.

These items are in "Used Condition", and are Relics from another Century. The item "Old US Army WW2 to Korean War era Canvas M-1945 Combat Backpack Used Condition" is in sale since Tuesday, April 16, 2019. This item is in the category "Collectibles\Militaria\WW II (1939-45)\Original Period Items\United States\Personal Gear". The seller is "clayandmilitaria07" and is located in Stockton, California.