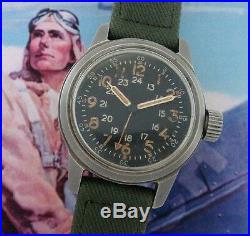 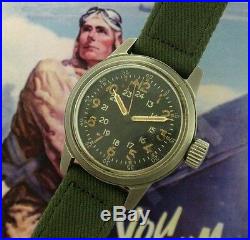 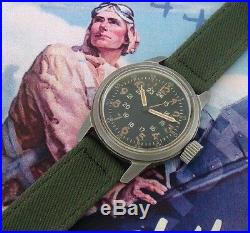 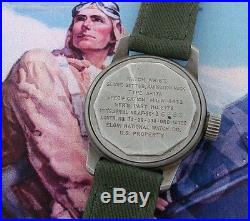 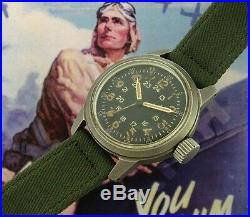 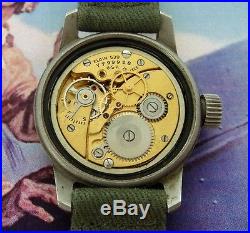 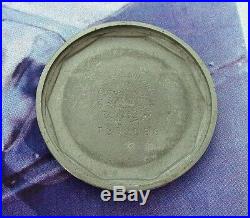 Today's military wristwatches are, in effect, disposable: their specifications state that they are made to be discarded when they stop running. However, 70 years ago, when WWII was raging, much more was expected from a timepiece. Resources weren't as available, technology was relatively simple and no one could afford to throw anything away. Watches had to be sturdy enough to stand up the grueling salt, heat and humidity of the Pacific Theater as well as the numbing cold of the European Campaign.

American watch houses ceased civilian production during these years and devoted themselves to producing timing instruments for the war. Of the timepieces carried in the field, the A-17 wristwatch seems to be one of the most romanticized and desirable. Ordered for Army Air Corps and Navy aviators, the watch had exclusive specifications: it had to be waterproof, have a center-sweep second hand as well as a "hack" feature, allowing the watch to be synchronized with a master time source for missions and bombing runs.

By pulling out on the stem, the sweep second hand would be "hacked" or stopped; time could be set, then the stem pushed back in so the sweep could resume its motion. The agreement with American watch houses was that they would support the war effort by supplying timepieces for ground troops and equipment; however, after the war all wristwatches had to be destroyed. American watch executives felt that if these watches were allowed back into the states, they would cripple business at a time when plants had not been able to produce and sell civilian watches for years. Government agreed and most of these faithful time companions were unceremoniously crushed, buried, or dumped to prevent them from competing with civilian watch sales. A few watches made it back to the states, most of which having been well used during the war.

A-17A Aviator's wristwatch shows some signs of being worn; retaining a remarkably crisp black dial and contrasting baton hands. It measures 39mm lug-to-lug by 32mm in diameter and features a midnight black dial with oversized numerals, an inner 24 hour track and baton hands - all crisp and correct. A completely correct bubble crystal is in what appears to be good, original shape. The crown snaps nicely when pulled out; hack feature works perfectly, stopping the sweep second hand for synchronized timing.

The watch is fitted with a correctly re-created o. Green strap that might have been worn during its military service. This piece is in the same fine shape it was during the Korean War era waiting to be worn by a discerning collector such as yourself or your loved one. For those of you who may not know us, we at. Featured as Forbes magazine's "Best of the Web" honoree consecutively since 2000 for timepieces, we're committed to bringing the best, the rarest, the cleanest examples of old wrist and pocket watches to clients around the world.

Monday through Saturday from 10 a. We take great pride in our images and item descriptions and are careful to note as much about an item as we can. If you have a question or would like to see the image of an item at another angle, we are happy to accommodate you. Please check our feedback; we try to be as accommodating as possible.

We invite you to find out more about us by clicking on our ME page! The item "Men's Vintage Antique Korean War Era Elgin A-17A Aviator's Watch SERVICED" is in sale since Saturday, September 28, 2019. This item is in the category "Jewelry & Watches\Watches, Parts & Accessories\Wristwatches".

The seller is "strickland_vintage_watches" and is located in Tampa, Florida. This item can be shipped worldwide.