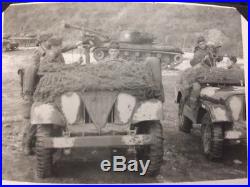 KOREAN WAR US ARMY 7TH INFANTRY RECON PLATOON PHOTO ALBUM, AMAZING. THIS WAS BOUGHT AT AN ESTATE. ALL ORIGINAL PHOTOS NEVER SEEN BEFORE, THIS ALBUM WAS FROM A US SOLDER IN THE 7TH INFANTRY RECON PLATOON. THE WERE IN JEEPS MOUNTED WITH. GREAT PHOTOS OF THEM IN THE JEEPS, TANKS AND TRUCKS'. CAMP LIFE, LEAVE IN JAPAN, GREAT GUN PHOTOS, M1 GARAND, 45 1911'S, BAR'S, BROWNING.

30'S, USO SHOW AT THE BAYONET IN KOREA, MOVIE STARS AND MUSICIANS ON TOUR WITH THE USO, IN THE FIELD, THE SNOW, GOOFING AROUND, CHRISTMAS, JAPANESE AMERICAN SOLDERS, MAGNIFICENT PHOTOS OF THE MEN WITH THE ARMED JEEPS, PHOTOS WITH THE LOCAL KOREANS, ARMY BOBBLE HELICOPTER, OFFICER IN FUR HAT, STAYING WORM FROM THE FIRE, EATING IN THE FELD, PET DOGS, JEEPS AND TANKS, BACK AT BASE, THE 38TH PARALLEL, THE KOREAN COUNTRYSIDE, INNER RACIAL SOLDER AND LOCAL KOREAN WOMAN AND FAMILY, THIS IS A VERY NICE ALBUM. KOREAN WAR US ARMY 7TH INFANTRY.

At the outbreak of the Korean War in 1950, the 7th Infantry Division commander, Major General David G. Barr, assembled the division at Camp Fuji near Mount Fuji.

The division was already depleted due to post-war shortages of men and equipment and further depleted as it sent large numbers of reinforcements to strengthen the 25th Infantry Division and 1st Cavalry Division, which were sent into combat in South Korea in July. The division was reduced to 9,000 men, half of its wartime strength. To replenish the ranks of the understrength division, the Republic of Korea assigned over 8,600 poorly trained Korean soldiers to the division.

The Colombian Battalion was at times attached to the division. With the addition of priority reinforcements from the US, the division was eventually increased to 25,000 when it entered combat. Also fighting with the 7th Infantry Division for much of the war were members of the three successive Kagnew Battalions sent by Emperor Haile Selassie I of Ethiopia as part of the UN forces. A village by a beach filled with landing craft, vehicles, and troops from a recently landed force The Inchon Landings The division paired with the 1st Marine Division under X Corps to participate in the Inchon Landing, code named Operation Chromite.

The two divisions would be supported by the 3rd Infantry Division in reserve. Supported by 230 ships of the US Navy, X Corps began landing at Inchon on 15 September 1950, catching the North Korean Army by surprise. The 7th Infantry Division began landing on 18 September, after the 1st Marine Division, securing its right flank. X Corps quickly advanced to Seoul, and the 1st Marine Division attacked the 20,000 defenders of the city from the north and southwest, while the 7th Infantry Division's 32nd Infantry Regiment attacked from the southeast. The 31st Infantry followed behind.

Seoul fell to the Americans after suffering moderate casualties, particularly for the Marines. The division then began advancing south to cut off North Korean supply routes. The 32nd Infantry crossed the Han River on 25 September to create a bridgehead and the next day, the division advanced to 30 miles south of Seoul and linked up with the 1st Cavalry Division at Osan.

Radio miscommunication and attack from nearby North Korean forces caused a miscommunication, the soldiers of the 1st Cavalry and 7th Infantry briefly engaged in a small-arms firefight with one another, unable to communicate. Seoul was liberated one day later with the help of air assets from the 1st Cavalry Division. The combined forces of the Eighth Army cut off and captured retreating North Korean troops from Pusan.

X Corps was kept separate from the rest of the Eighth Army to avoid placing a burden on the logistical system. It withdrew back through the ports of Inchon and Pusan, as part of a plan to conduct another amphibious assault in North Korea. The entire battle for Inchon and Seoul cost the division 106 killed, 411 wounded and 57 missing American soldiers, and 43 killed, 102 wounded South Korean soldiers. By mid-October, the North Korean army had been almost completely destroyed, and US President Harry S. Truman ordered General MacArthur to advance all units into Korea as quickly as possible to end the war.

The 7th Infantry Division, still part of X Corps, participated in a second amphibious assault on the east coast of North Korea, landing at Wonsan on 26 October and I won on 29 October. The landing was delayed due to the presence of mines, and by the time X Corps arrived, South Korean forces were already occupying the ports.

The division advanced to Hyesanjin, on the ChinaNorth Korea border by the Yalu River, one of the northernmost advances for UN soldiers of the war. Much of X Corps followed behind. On 21 November, the 17th Infantry reached the bank of the Yalu river. The advance went quickly for the 7th Infantry Division and South Korean troops while the Marines were not able to advance as quickly. The division halted its advance until 24 November while other units of the Eighth Army's IX Corps and South Korean II Corps caught up and supply lines were established.

During this time, the 7th Division's regiments were spread out on the front line. The 31st Infantry Regiment remained at the Chosin Reservoir with the 1st Marine Division while the 32nd and 17th Infantry Regiments were much further to the northeast, closer to the South Korean I Corps. It was during this time that the division was served by a new type of unit, the 1st Mobile Army Surgical Hospital M. The item "KOREAN WAR US ARMY 7TH INFANTRY RECON PLATOON PHOTO ALBUM, AMAZING" is in sale since Tuesday, November 27, 2018.