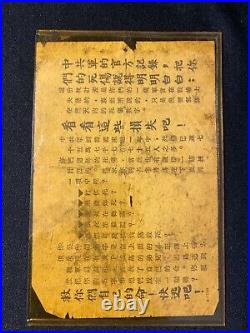 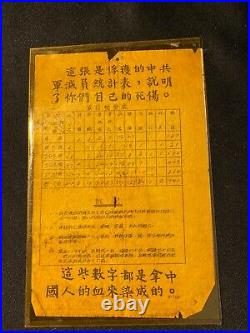 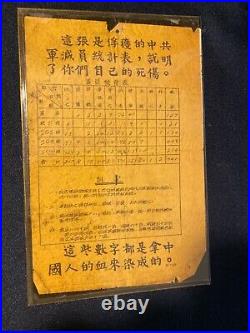 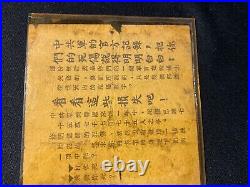 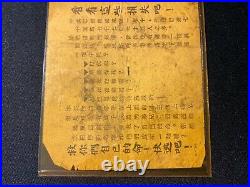 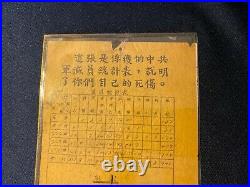 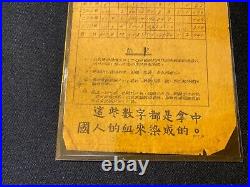 In one part you can read in the updated translation where the paper implores the solidiers to. From a captured report as evidence and give. The paper is very delicate, probably rice paper.

It is in a heavy yellow colored plastic slip cover. And I chose not to remove for photos, but the paper is much lighter. UPDATE--Below is a translation from a native speaker, much more accurate! This is the Chicom casualty list captured by us, detailing WIA and KIA on your side. Number // classification // AWOL // self inflicted wound // suicide // wounded // KIA // sick // lost unit // missing // death by illness // executed // total.

This chart a casualty list, from June 9th for 204 Division and June 10th for other units until August 5th. WIA and KIA includes death by flooding, airstrikes, auto accidents, and fire. The sick, 188 were sent to Burma, others are being handled by army, division, and brigade level medical squads. For this, frontline "white unit"? Casualties have been subtracted by 36. All these are dyed red by Chinese blood. The Chicom official records listed very clearly your WIA and KIA numbers. This chart was lost by one of your officers on the battlefield. Inside are numbers for just a few of your units, in a few days. Look at all those losses! Chicom forces have lost 757775 since their arrival to Korea a year ago.

Do you want your name on the casualty list? Remember, thousands upon thousands of your brothers have surrendered to the UN and saved themselves. Will you put your name among them instead? Text with English translation below (may not be entirely correct).

The official records of the CCP clearly state your casualties: This statistical table was lost on the battlefield by one of your officers, and what it says is only the casualties of several troops in a few days. Just look at these losses!

During the year the CCP army came to Korea, the number of casualties. Reached Of course, there is a statistical table like this for your division's casualties. Then your name will be on the bottom.

What about the corpse of the. The army has found you an achievement that shows that you are here.

If you hit it, you will be killed? A total of 22 but you Yilian want to. You want to question the brother Wanghai whose name is on the sea?

Now, there are thousands of brothers who have escaped to. The army and saved their lives. Would you mind putting your name with them?

This is a statistics table of the CCP army's attrition that was stopped, and it shows your own casualties. Attrition praises the new watch.

As of August 10, Lost in Eighty-One, Famous, Fifty. Women's Names, Disintegration in the Blue Show, and 36 reductions in opposition to the Supervisory Committee and success. These figures are all taken from dyed with Chinese blood. Measures approximately 7 1/2 by 5. This item is in the category "Collectibles\Militaria\Korea (1950-53)\Original Period Items".

The seller is "laz-e-bid" and is located in this country: US. This item can be shipped worldwide.