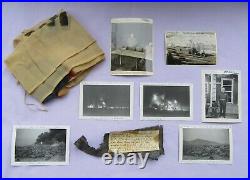 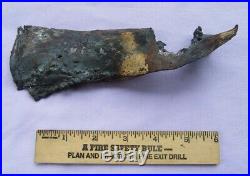 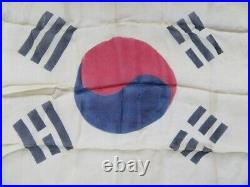 How rare are Korean War souvenirs? We basically got our asses thumped over there (due primarily to poor leadership at the top echelons, not necessarily a reflection of the fighting man on the ground) so Korean War souvenirs are few and far between. In this case, a U. Army colonel by the name of Wilbur Gaige, who performed an important logistics function in Korea, brought back a piece of shrapnel from a Communist incendiary bomb that was dropped on the fuel dump at Inchon in June 1953.

What is particularly interesting about this piece of metal is that it is accompanied by several period photographs taken by Colonel Gaige himself, which show the burning fuel dump at night (2 pics) and also the remnant of the fuel dump next morning (2 pics). There are also two nice pictures of Colonel Gaige in uniform, as well as a picture of Korean soldiers carrying large 460-lb. Drums of POL (petroleum, oil, lubricants) several months before the actual bombing incident. A small-size, rough linen South Korea flag is also included as part of this grouping. The paper label on the shrapnel fragment reads.

This is a piece of incendiary bomb that the No. Korean Commies dropped in the P. Drumming plant at Inchon when I was there in June 1953. They used a small propeller craft like our liaison planes. The item "KOREAN WAR SOUVENIR Grouping Communist Shell Fragment with Provenance & Photos" is in sale since Saturday, November 14, 2020. This item is in the category "Collectibles\Militaria\Korea (1950-53)\Original Period Items". The seller is "battlehorse" and is located in Moneta, Virginia. This item can be shipped worldwide.