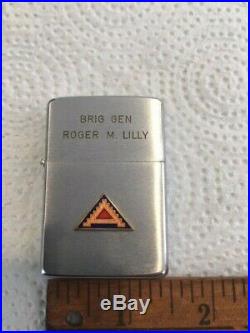 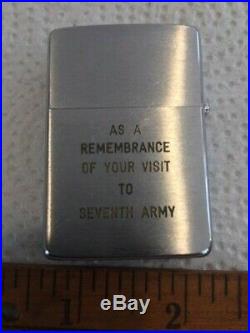 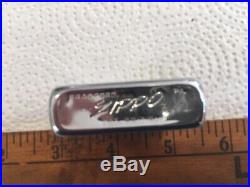 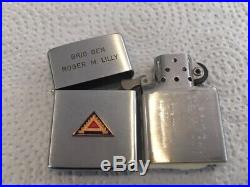 A rare unfired Korean War Zippo lighter with personal inscription from the 7th Army to then Brigadier, later Major General Roger M. Bearing 1950-57 patent to base and body, this Zippo is engraved BRIG GEN ROGER M. LILLY with enameled 7th Army insignia to one side and AS A REMEMBRANCE OF YOUR VISIT TO SEVENTH ARMY to reverse. Unfired, but flint is loose so it does not light. The item "Korean War era Zippo Lighter 7th US Army Named General Roger M Lilly 1950-57 NEW" is in sale since Tuesday, August 27, 2019.

This item is in the category "Collectibles\Tobacciana\Lighters\Zippo\Other Zippo Lighters". The seller is "bdnad" and is located in Portland, Maine.