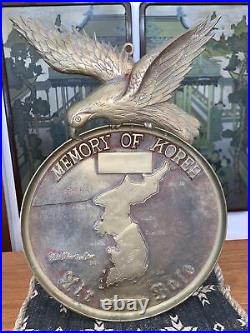 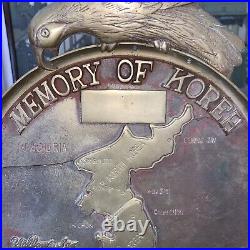 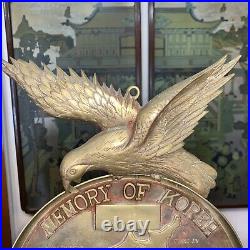 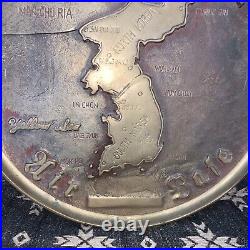 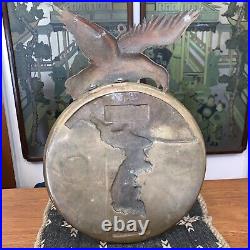 For sale Is a very unique, most likely "theater made" (in Korea), solid brass, US Air Force veterans plaque, featuring a very well rendered eagle, mounted atop a circular "plate" which depicts the entire Korean peninsula, and the raised wording "Memory of Korea" / "Air Base", as well as a large, raised rectangular plaque at the top, and a smaller one at the bottom, onto which I would imagine, one could have had his or her name engraved. Below the word "Memory" is incised into the plate, "Manchuria", and the depiction of the Korean peninsula itself has the incised names "SIN EUIJOO, PY UNG YANG, and "North Korea" into the top half, whereas the bottom half (below the 38th parallel / border line), has "South Korea as well as SEOUL and DAI KU incised into it. Additionally, all along both sides of the peninsula are markings depicting other locations whose names also appear incised into the flat surface surrounding it. ("Yellow Sea", which is spelled out in raised, cursive letters), along with "MOK PO", "DAE JYUN" AND "INCHON". On the right side (Sea of Japan side), appear the names "PU SAN", "CHUN CHON", "WON SAN", and "CHUNG JIN".

If I had to date this item, I'd place it in the mid to late'50s. The method of construction leads me to believe that it was most likely a locally made, "sand cast" item, produced for sale to the American servicemen, presumably by some enterprising locals. All I can say for sure is that I've personally never seen or come across another one. It is non-magnetic, and appears to be all solid brass.

The round section itself measures 10 7/8 inches in diameter, and the eagle itself, which is secured to the round section via two brass slotted screws, measures 9 1/2 inches from wing tip to wing tip, and roughly 6 inches tall. The overall height is 16 inches. It can be suspended via a single brass loop, which is cast integrally as part of the eagles forward facing wing.

There is just a slight bit of "flatness" to the edge at the 6:00 position of the disc, otherwise, the condition is excellent w/ a very nice, un-touched brass patina. What an impressive, unique gift this would be for any 1950s US Air Force / Korean War period veteran, or fabulous addition to any Korean War / Cold War vintage collection or display! This item is in the category "Collectibles\Militaria\Korea (1950-53)\Original Period Items". The seller is "whoopdedoopdedoo" and is located in this country: US.