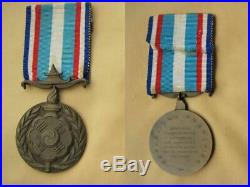 1950'S KOREA FRENCH WAR SERVICE MEDAL. On June 25, 1950, the armed forces of the North Korea invaded South Korea to obtain by the force the reunification of the country to the profit of the communist bloc. This aggression caused, initially, the application of economic sanctions and soldiers by the United Nations.

But after a rapid advances, the troops of north were driven back to the Manchu border by the forces of the O. Were ordered by the American general MAC ARTHUR and were consisted the quotas of ten seven countries. However, this multinational force had to beat a retreat when the conflict was internationalized with volunteer sending by China. After hard combat and the signature of an armistice with Pan Mun Jom, on July 27, 1953, a line of cease fire was instituted slightly in the north of the parallel 38ème.

France took part in these operations by the sending symbolic system, in November 1950, of a battalion of 1.051 volunteers, Army, Navy and Air, the active one and reserves, placed under the orders of the lieutenant-general of army Raoul Charles MAGRIN-VERNEREY say MONCLAR, which to be able to exert this command had to be useful as lieutenant-colonel. Later on, a second battalion, placed under the orders of lieutenant-colonel LEMIRE, will take share with the operations. Our soldiers illustrated themselves at the time of the combat of Wonju (February 9, 1951), close to Chipyong-Nor (February 2, 1951) and at the time of conquest of the famous solid mass of Crévecoeur. For the French, the human account of the war was the following: on a committed total staff complement of 3.421 men, 262 were killed, 1.008 wounded and 7 carried disappeared.

Under the impulse of Mr ROTINAT, president of the commission of the national defense of the Council of the Republic, is created by the decree of January 8, 1952 the French Medal commemorative of the Operations of the United Nations in Korea, aiming at distinguishing the important facts from weapons of the French battalion of the O. No one cannot claim with the port of this medal if it were the object, during the countryside, of a judgment to an afflictive or defamatory sorrow. He is delivered a diploma and the right to the port of this decoration this justifies by the possession of an attesting administrative document of the participation in these operations. The requests for attribution are done near the office of decorations to the ministry for Defense. U has for its part created, on December 12, 1950, Medal of Services of the United Nations, for Korea, which was allotted to the members of the armed forces of the 17 countries which took part, between on June 27, 1950 and July 27, 1954, with the operations.

Think of a watch my other medals for sale. The item in photo is the item you will receive (not stock photo). Check out my other items! The item "France Military Médal Korea Korean War Service Commemorative 1950-1953 French" is in sale since Wednesday, August 28, 2019. This item is in the category "Collectibles\Militaria\Korea (1950-53)\Original Period Items". The seller is "crocolion95" and is located in Beaubray. This item can be shipped worldwide.