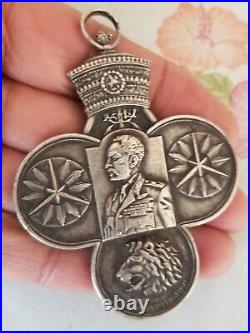 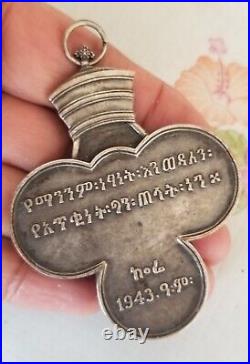 Original Large silvered bronze trilobe medal with integral imperial Ethiopian crown suspension, the face with the left and right lobes each bearing a rayed Trinity cross, the lower lobe with the Lion of Judah above an Amharic inscription in Ge'ez, a plaque with a portrait of Emperor Haile Selassie I imposed centrally, the reverse with an Amharic inscription in Ge'ez and dated'1943' (AD1950); height 66.85mm (2.63 inches), width 52.52mm (2.07 inches) age-toned When the Korean War broke out in 1950, Emperor Haile Selassie I raised a volunteer battalion from the Imperial Bodyguard for deployment under United Nations auspices. The force was named the Kagnew Battalion and fought alongside the United States Seventh Division. Between 1951 and 1954, three Ethiopian battalions (some 5,000 men in all) fought with distinction in Korea. This item is in the category "Collectibles\Militaria\Korea (1950-53)\Original Period Items". The seller is "abyssiniangoods" and is located in this country: ET.