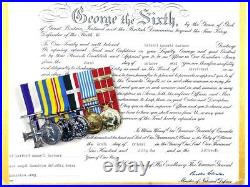 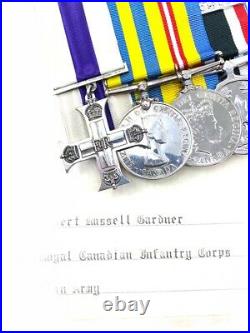 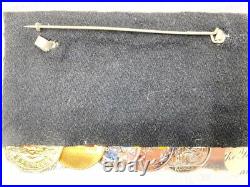 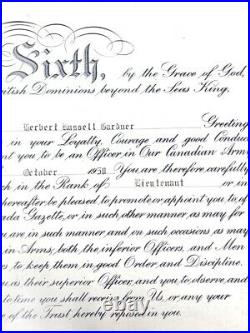 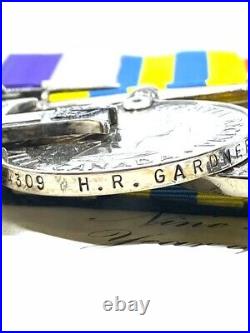 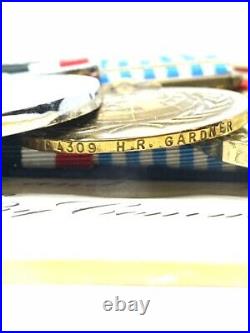 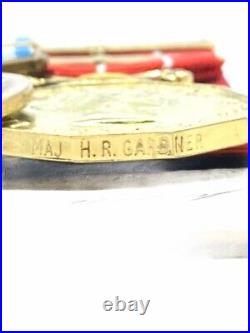 Canadian Korean War Military Cross Medal Group RCR Major Gardner RARE. The outstanding immediate 1952 Korea M. Group of six awarded to Major H. Russ Gardner, 1st Battalion, Royal Canadian Regiment, for leading a textbook snatch patrol behind enemy lines near Chinese positions on Hill 227, 23/24 September 1952. He bagged his prisoner after 60 hours of lay-up just yards from an enemy field kitchen. Gardner had already been wounded, whilst serving with the 2nd Battalion, during the Chinese assault on Hill 163, 25/25 March 1952, but he was perhaps most unlucky not be further recognised for his heroics during the battle of Kowang-San, 22 - 24 October 1952. In the centre Lieutenant Gardner and another small band of B Company men fought desperately against hundreds of Chinese attacking from the south. On the verge of being overrun, Gardner ordered his men to make for the safety of A Companys trenches. He bravely remained to cover their retreat emptying his automatic carbine at the oncoming Chinese. In this action Lieutenant Gardner was repeatedly hit by enemy fire and eventually went down, but not before he personally shot five Chinese soldiers. He pretended to be dead as hundreds of Chinese moved through B Companys position, ruthlessly bayoneting the bodies of any fallen Canadian soldiers that they found. In the darkness and confusion Lt. Gardner was able to crawl to A Companys trenches, dragging with him a wounded comrade. They had been the last Canadians alive in Area 2.

In recognition of gallant and distinguished services in Korea. At 0330 hours on the night 23/24 September, 1952, a patrol composed of Lieutenant Gardner, two Corporals, and three Privates left a forward defended locality of the Royal Canadian Regiment with orders to go to a known enemy area and to seize a prisoner. The patrol moved parallel to enemy-held positions, and at 0600 hours reached a spot near the objective where a firm base of a Corporal and two Private soldiers was established. Lieutenant Gardner with Corporal Fowler and one Private soldier advanced to the objective, an enemy bunker, which proved to be unoccupied. Lieutenant Gardner, who was determined to take his prisoner, decided to make a further advance to an enemy communication trench.

This entailed a move across one hundred and fifty yards of open ground dominated by enemy occupied hills. Leaving the Private soldier at the bunker to cover them, Lieutenant Gardner and Corporal Fowler, walking slowly in order not to attract attention moved to the communication trench where they took cover. They were now seventy-five yards from a group of enemy around a field kitchen. No sooner were they in position than an enemy soldier passed, but they took no action as he was out of reach. Lieutenant Gardner then noticed in the trench a signal line which, with Corporal Fowlers assistance he broke.

Within five minutes a Chinese soldier came running down towards the kitchen making a quick check of the wire. This officer struck the Chinese soldier, and with the non-commissioned officers assistance, pinned him to the ground.

There was a fierce struggle, during which the Chinese continued to cry out loudly. By the time he had been overpowered and got to his feet, his comrades from the field kitchen were within thirty yards and had opened fire. They were halted and sent to ground by fire from Lieutenant Gardners weapon as Corporal Fowler got the prisoner moving towards our lines. By this time the fire of automatic weapons from the surrounding hills had been added to that of the pursuing Chinese, but, by skilful use of ground, Lieutenant Gardner was able to guide Corporal Fowler safely to the firm base party and thence to our lines. Fortunately they were not in trouble. This officers daring and skilful leadership, superb coolness in the face of the enemy and utter disregard of his personal safety enabled a bold plan to be carried out with complete success and without casualties. This courageous officers determination to carry out his orders in spite of difficulty and danger is an example to all members of his regiment.

Was born in Arnprior, Ontario, Canada, in July 1927. Having been commissioned, Gardner served with the 1st Battalion, The Royal Canadian Regiment in Korea, April 1952 - March 1953.

Lieutenant Russ Gardner was actually wounded twice in action. He would be awarded the Military Cross for his inspired leadership of a fighting patrol conducted behind enemy lines against Chinese positions on Hill 227, opposite Kowang-San (Hill 355), on the night of 23/24 September 1952. Gardners patrol was highly successful and a text book example of a snatch patrol. During a fighting patrol, mounted by Lieutenant H. Russ Gardner and five men of B Company, including Corporal K. Fowler, a Chinese signaller was snatched from an enemy kitchen area, while five other Chinese soldiers were shot dead. The prisoner proved to be from the 346th Regiment, 116th Division, of the Chinese 39th Army. For this action Gardner was awarded the Military Cross and Fowler won the Military Medal. ZC4309 Lieutenant Gardner was the Commander of 6 Platoon, B Company, 1 R C R.

During the epic battle of Kowang-san, 22 - 24 October 1952, he would again distinguish himself for his selfless leadership and inspiring courage under fire. In this action Lieutenant Gardner was repeatedly hit by enemy fire and eventually went down, but not before he personally shot and killed five Chinese soldiers. Hundreds of Chinese moved through B Companys position, ruthlessly bayoneting the bodies of any fallen Canadian soldiers that they found.

In the darkness and confusion Lieutenant Gardner was able to crawl to A Companys trenches, dragging with him a wounded, Private Perry of 5 Platoon. They had been among the last Canadians alive in Area 2. Following the Korean War H. Gardner would continue to serve in the Canadian Army, eventually rising to the rank of Major. The Royal Canadian Regiments own account for the battle of Kowang-San gives the following.

As of last light, 22 October, B Companys field defences had been reduced to a deplorable state by the continuing Chinese bombardment. Many bunkers had caved in, most of the reserve ammunition buried and telephone lines cut. With enemy mortar and artillery fire continuing to intensify on Area 2 an attack was anticipated that night. As a result B Company remained at 50% alert throughout the night with one man up in each weapon pit while his partner slept. Chinese sappers worked in close to B Companys positions, destroying wire obstacles with crude bangalore torpedoes.

By dawn on 23 October, the situation in Area 2 was precarious in the extreme. All communication with the rear had been cut and enemy shelling had destroyed all of 6 Platoons bunkers, forcing the soldiers of this platoon to move to their left and take shelter with 5 Platoon. Lieutenant Gardner assumed command of the two combined platoons and Lieutenant Clark acted as a runner to Company Headquarters (HQ) and Battalion HQ to the rear.

The weight of Chinese fire kept B Company pinned down during the day; any movement above ground was next to impossible. As a result, neither food nor ammunition could be pushed forward to the beleaguered platoons of B Company. The enemy barrage on B Company increased dramatically for ten minutes then rolled on to the rear and flanks. A massive Chinese infantry assault on Area 2 was only minutes away and withdrawal was impossible.

Major Cohen and Lieutenants Gardner and Clark and Sergeant Gerald E. Enright (5 Platoon Sergeant) hurriedly organised the 30 survivors of 5 and 6 Platoons into some semblance of defence. Blocking positions among the shattered trenches were established and men who had lost their weapons organised into bombing parties. Enemy small arms fire was heavy to their front and large numbers of Chinese began to move in from the flanks. Area 2 was now being attacked by the equivalent of two enemy battalions. The Battle of Kowang-San, fought between 22 and 24 October, 1952 had lasted 33 hours. In that period 1RCR had suffered 18 killed, 14 missing, and 35 wounded. Enemy casualties were unknown but believed extremely heavy.

In fact, in the aftermath of the battle, helicopter observers counted up to six hundred Chinese bodies scattered across the battlefield. The defence of Hill 355 had been the bloodiest and most significant action fought by 1st Battalion, The Royal Canadian Regiment during its eleven month combat tour in Korea. Throughout this period, the Battalion would suffer a total of 282 casualties, including 51 killed in action, 204 wounded, and 14 taken prisoner. Each Battalion in its own turn would serve a combat tour in the theatre of conflict. Total casualties suffered by the Regiment in Korea were 117 killed and 408 wounded.

The item "Canadian Korean War Military Cross Medal Group RCR Major Gardner RARE" is in sale since Friday, May 28, 2021. This item is in the category "Collectibles\Militaria\Korea (1950-53)\Original Period Items". The seller is "military*antiques*toronto" and is located in North York, Ontario. This item can be shipped to United States, all countries in Europe, all countries in continental Asia, Canada, Mexico, Australia.