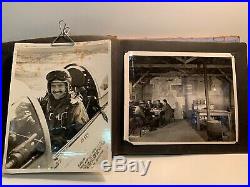 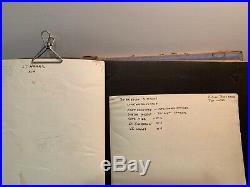 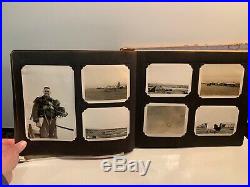 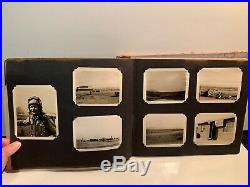 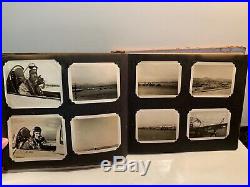 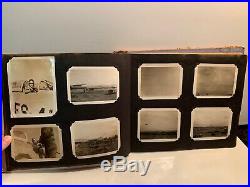 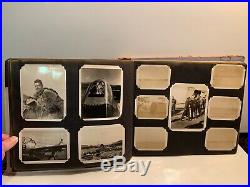 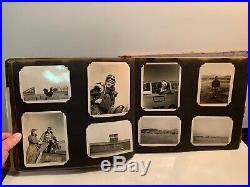 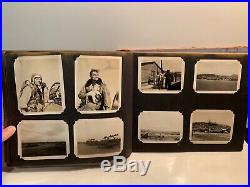 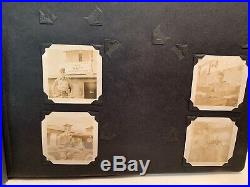 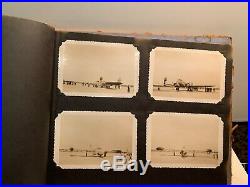 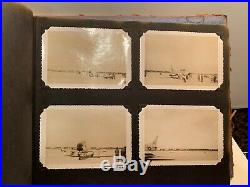 13x10 album, missing its front cover. Contains 97 photos of 136th Fighter-Bomber Group, 111th Fighter Group and 58th Fighter-Bomber Group at Taegu Air Base in Korea. I don't know the identity of the airman who put these photos together, though there are several photos of him in the album. In one photo captioned "Snowed Under" he sits before a desk with loads of paperwork on top of it. There's also a photo of him and a buddy about to go on patrol captioned "Scared to Death".

At any rate, he either was a good photographer or had access to the base photo collection. Just some great shots here, and almost all of them have captions, in a very legible hand, on their backs. Most are of aircraft, pilots (all identified and a couple killed in action), and the base.

There's a series when he went into the town of Taegu to a Japanese/Phillipines baseball game. And a few of a smashed up T-34 tank in a field.

I have come across abut 2 dozen Korean war photo albums in 35 years of searching, and this is by far the best one, due to the quality of the photographer and developer and of course, the subject. My only regret, as well as his, Damnit to Hell!!! Was the double exposure of a P-51 under an AA gun emplacement.

Any time I use parenthesis those are my words, not the caption. Harris KIA (Killed in Action-pilot). 8x10" photo "Debriefing a Mission. Walsh #4 Picture taken during winter. 5x7" --"Ed Unser after his 100th Mission Really happy to go home. Lined up on the ramp.

Dog Fight-Mig and 84 both in a circle. Mig has just made a pass. A/C from the front of the office. The have pilots in them and are preparing to go off. In the right side of photo you see a plane going down the R/W.

He is landing on two wheels, nose, and one main gear. The other gear was stuck up.

He went around and made a belly landing. I have those here too. Jaynes "Worrybird" (Pilot) looked worried at all times.

View of line from Tower. Lone bird on the final. Supply dump, one of them, taken from our tower.

AA position on hill with road going up it. Loaded-Rockets on wings-Bombs {500 pounders} on bottom-F84E Plane used for close support missions.

Double exposure, damn it all!!! A/A position over picture of P-51 Mustang. Bill Hudson (pilot) read to go on 100th. 3 aircraft coming home from P. Peeling off for the final pattern, prior to landing. A hot return from the Yalu. Taxiing out to the take off on a mission. Hitchcock (pilot) again after 100th mission. General view of line buildings and bombs on trucks.

Anna Rosenberg come to call (Assistant Secretary of Defense). My home in the far east (a barrack). Runway with Jets going off and mountain and sky. Transports carrying 187th division paratroops in background. They took off to make practice jump.

Could not get pictures of jump. Langston (pilot) killed in action 111th FTR. Dean Chapman (pilot) always in a sweat. Unloading from trucks bombs and ammo for A/C.

The ops crew at rest. Runway--Bob's tower in background. Shot of Barracks tent for the "Gooks" AA position on hill in background. Near entrance to ball park. Taego R&R Station--All streets have at least this many people on them.

Washing in Naktong River in town of Taegu. Shacks in background are part of the city--This is not so crowded day.

Really as nutty about the game as the Brooklyn crowd. Me & buddy just before going out on patrol. We are both looking tough but scared as hell. Tread shot off and shot up.

George and I waiting for return of mission. The last dozen or so photos of a fighter on the runway don't have captions.

See scans or photos for condition. Prices are our best price. Just takes too much time with so many listings.

Good feedback automatically given reciprocally. You must return the item so we can offer it to the underbidder. The item "Big Korean War Photo Album, 58th & 136th & 111th Fighter-Bomber Group Air Force" is in sale since Sunday, January 26, 2020.

This item is in the category "Collectibles\Militaria\Korea (1950-53)\Original Period Items". The seller is "mainebarnandattic" and is located in Azle, Texas.