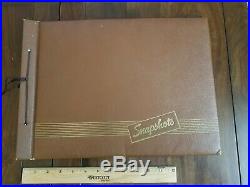 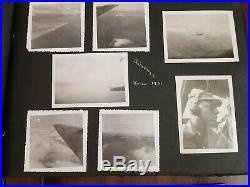 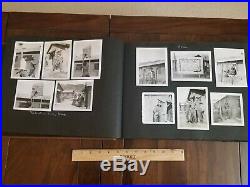 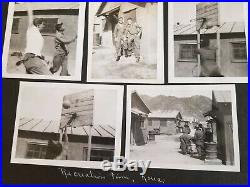 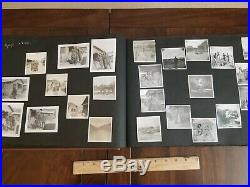 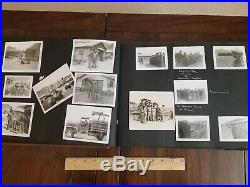 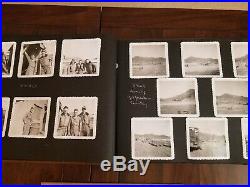 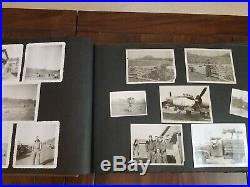 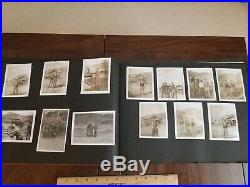 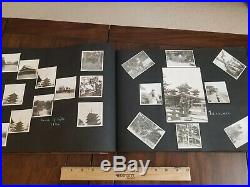 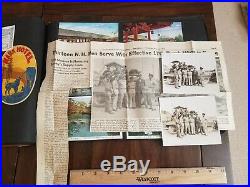 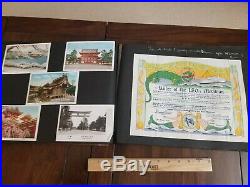 SCROLL DOWN PAST ITEM DESCRIPTION TO SEE MANY OF THE PAGES FROM THIS ALBUM. This album belonged to a man named Robert Brown from Plymouth New Hampshire who served in the U. Airforce during the Korean War serving in the 17. Bomb Wing stationed at Pusan East Airbase in South Korea. Items in the album date from 1951 to 1953. Front cover measures approximately 16.5 inches by 11.5 inches. The album starts with his 1951 high school graduation picture and chronicles his enlistment in airforce, service in Korea and return home. Inside are 388 photographs, postcards and some paper ephemera items. 90% of the items are photographs.

In an envelope is a newspaper clipping describing his service as a munitions man. The album can be categorized as follows in the following chronological order.

High School and Air Force Boot Camp 38 photos/items. Korea 123 photos/items all taken in service in Korea. Some photos taken from bombers in flight.

Some photos at some sort of USO show. A few pictures showing bomber nose art. Photos taken on leave in Kyoto.

Photos on his return to the United States in 1953. Includes a bunch in Salt Lake City.

Where he must have been stationed before returning to New Hampshire. Photos in 1953 in New Hampshire. Overall the album is in excellent condition. A few pages have pulled loose from the binding at the punch holes.

A great time capsule of an airforce man time in the Korean War. Please see my other auctions. The item "1952 Korean War U.

Airforce Airman Photo Album 388 Photos & Items" is in sale since Thursday, May 14, 2020. This item is in the category "Collectibles\Militaria\Korea (1950-53)\Original Period Items". The seller is "patricka" and is located in San Francisco, California.