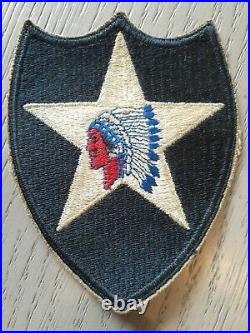 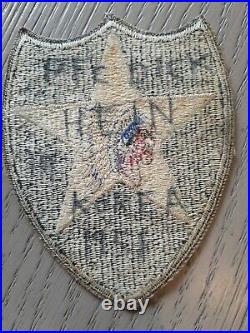 1951 KOREAN WAR Army 2nd Infantry Division Patch, PFC Dick Hein Korea 1951 written on back. This places the patch in Theater, in 1951. This was a very historical year for the "Indianhead" Infantry Division.

On 5 February 1951 the Battle of Chipyong-ni was the first major defeat for the Chinese and proved to be the turning point of Korean War. In April and May 1951, the 2nd Infantry Division was instrumental in smashing the Communist's Spring Offensive as they fought for hilltops in the Iron Triangle, Pork Chop Hill, Baldy Hill, Bloody Ridge, and Heartbreak Ridge. During the Korean War, 20 2nd Infantry Division Soldiers were awarded the Medal of Honor.

The Division was awarded the Republic of Korea Presidential Unit Citation on 26 October, 1953, for valor in combat and excellence in the training and integration of ROK forces into their ranks. The 2nd Infantry Division emerged as the most decorated Division from the Korean War..

Condition is Great Vintage Preowned. If you have any questions let us know. This item is in the category "Collectibles\Militaria\Korea (1950-53)\Original Period Items".