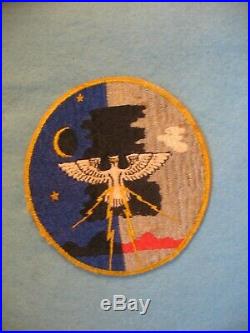 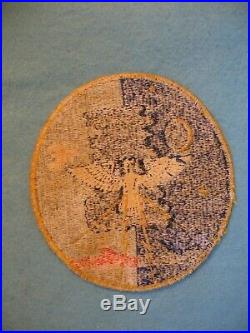 Original used early 1950's United States Marine Corps Marine Fighting Squadron Night 513 squadron patch. VMF(N)-513 initially flew F7F Tigercats and F4U-5N out of Pusan West K-1 providing the only night fighter / interdiction on the Korean peninsula in 1950-51 then transitioned to the F3D-Skynight Jet fighter and escorted B-29 Superfortress on night time missions over North Korea recording the first radar kill of an enemy jet and scored 10 night victories during the war. Patch is US embroidred with a cut edge.

Patch measures 4.6 inches and is in very good used condition with spots of toning on the front and moderate wear from being on a G-1 flight jacket or a flight suit (Please see photos for the best description). Please see my other listing for more Navy and Marine Corps squadron patches, WWII patches, and other military insignia. Thank you in advance for understanding this. The item "1950's USMC VMF(N)-513 Night Fighter Flying Nightmares Korean War squadron patch" is in sale since Thursday, July 2, 2020. This item is in the category "Collectibles\Militaria\Korea (1950-53)\Original Period Items". The seller is "geeindustry" and is located in La Mesa, California. This item can be shipped worldwide.